In his original game, Zetta was the most powerful Overlord in the universe. After reading the Sacred Tome and learning that he, in his foolishness, just doomed his Netherworld to destruction, he objects to being called foolish and burns the Tome in a fit of rage. Only later does he realize doing so will destroy his own Netherworld, and he is only able to survive by trapping his own soul in the Sacred Tome, forcing him to rebuild his Netherworld from the ground up in this form. He does this by getting other Overlords to write wishes in his book body. The Overlords he gets to help him are Pram The Oracle, Dark Lord Valvoga, Dragon Overlord Babylon, King Drake The 3rd, Underlord Seedle, Lady Salome and Alexander The God Of Destruction. Despite regaining his body in the ending, his subsequent appearances (until Disgaea 4 and onwards) have had him still in the form as the Sacred Tome.

He is the main character of Makai Kingdom. (For backstory, see above) His human form serves as the character for the game's primary tutorial as well as being available for recruitment. His body can be recruited (Morbid, but necessary in Zetta's view) by writing the wish "I wish to fight the Strongest Demon!" Zetta's body seems to have a will of its own, only to be warned by Trenia (Or Laharl if he is the one who wrote the wish) after the battle that Overlord Baal is possessing the body. Upon its defeat, the body will join your party. It has 160% Aptitude in all stats, but is only good with ATK-based weaponry. It is good with Swords, Katanas, Beam Swords, and Daggers. Strangely, even though it is just a body, it use's Zetta's voice clips in battle, presumably because Zetta himself fights using the body in the tutorial battle.

By passing the Stronger Enemies Bill 20 times, the player is able to encounter Zetta as a bonus boss in the Stellar Graveyard. He is at level 9999 (or 3200 if you undo the bills after unlocking the fight. Note that you MUST talk to the Dimension Guide before you undo the bills, otherwise, the fight will not be accessible until you re-pass them.)

Zetta can be unlocked with the same requirements as in Afternoon of Darkness. This time, however, he is a recruitable character with extremely high aptitudes (180%, the highest out of any character in the game), but little to no movement capability as a price.

Zetta can be encountered after completing 10 Dark World stages and passing the bill to "Meet the Strongest Overlord". In the pre-battle scene, Zetta is flopped face down on the floor. Tink then notices him, thinking him to be just an old book, only to get blasted by the Zetta Beam attack. The battle arena itself is littered with buildings and vehicles from the game Makai Kingdom. Completing this stage grants Adell the "Badass Overlord" title.

Zetta can be encountered in the same way as in Cursed Memories. However, beating him also unlocks a bill to pass in the Dark Assembly which will unlock him as a playable character.

Like his previous version, Zetta's attack strength, health, and overall stat distribution are pretty decent, with two attacks that can hit for up to 5 squares away with a large AoE spread. Zetta cannot, however, gain more than 2 panel movement (by passing his movement bill in the senate) and thus he is a very clumsy unit to maneuver on large maps without throwing him or giving him high-tier movement items like an Accelerator.

Zetta is downloadable content in Disgaea 3. In the game, he appears at the Evil Academy Library on the floor. When Mao and the group walk over to him, he fires his "Zetta Beam" at Mao, similar to how he blasted Tink in Disgaea 2. This initiates the battle with him. Afterwords, he speaks about the Sacred Tome, revealing that it can grant wishes. Raspberyl tries it out by wishing for "Netherworld Peace" but Zetta retorts that such a wish won't be granted because Zetta doesn't want to grant it. Mao is impressed with Zetta and decides to make him his personal Notebook (recruiting him in the process). His Magichange turns him into a bow. During battle, Zetta can use the attacks Sacred Tome, Zetta Beam and Badass Overdrive. In his Magichange state, he gives the equipped character access to 2 attacks, one of which is "Invite" in which Zetta "Invites" a Castle onto the enemies. This serves as a reference to his game Makai Kingdom, in which you Invite characters, Buildings and Vehicles into the map area to help you conquer it. Doing so close enough to other characters deals a small amount of damage to both friend or foe. He also appears in the Downloadable "Raspberyl Mode". In it, it is revealed that the School Board President found Zetta in the school's library and decided to turn him into a P.E Textbook (however everything that she may have written in him may have disappeared since Zetta can remove writing and wishes written in him that he doesn't like). The School Board President then attempts to use Zetta against Raspberyl and the gang in a battle. Before the battle starts, Zetta also manages to attack Gold Knuckle with his "Zetta Beam" attack, killing him (but Gold Knuckle SOMEHOW manages to respawn some time afterwards). The battle plays out similarily to the first fight with the School Board President with Zetta acting as a replacement for the Mothman that the President Magichanges with to fight Mao.

Zetta appears as an optional boss and recruitable character in this installment, but unlike his prior appearances, he is in his actual body rather than inside of the Sacred Tome. He is level 4000 in this game as opposed to 2000 like in previous games and comes equipped with powerful gear like the Yoshitsuna sword and Makai Wars during the battle with him. He appears before Valvatorez, hoping to get a good fight by challenging him and his party. After being defeated, he joins, somewhat against the party's will.

To unlock Zetta for recruitment, the player has to defeat the previous Post-Game boss Pringer X, then pass the Dark Senate Bill that appears for 256,000 Mana. Zetta will join the party after he is defeated.

If Petta, Zetta's daughter, is defeated after Zetta is recruited, Zetta appears and pleasantries are exchanged between him and Petta. Afterwards Zetta reluctantly allows Petta to join the party, but his conditions shows how much he spoils her, two hour afternoon naps being one of them. This makes Fuka call him the biggest Tsundere of them all.

Zetta makes an appearance in Disgaea D2 as a downloadable character. He appears in his actual body like in Disgaea 4. Zetta's Book form is also a usable Book weapon as well. In his DLC, Zetta is frantically looking for Petta like any good father would, though he tries to deny this to Laharl and the others. They get into an argument because of this, leading to a battle with Zetta. After he is defeated, Petta will appear and happily reunite with Zetta (much to his embarrassment), and convinces him to be one of Laharl's vassals, effectively forcing Zetta to join the party.

His overload skill, Grand Avesta, lets him summon a Pedestal as an invite onto the portal, increasing the height of the portal and allowing 5 more character to be deployed.

He can pair up his attack with one Disgaea 5 character, Red Magnus, called Rising Magna Star.

Marona and Ash stumble across Zetta laying down, mistaking him for a diary. When Marona investigates further, Zetta springs into action and attacks her with a Zetta Beam, narrowly missing her. Ash attempts to fight Zetta, but Marona suggests that Zetta be treated with kindness. This does nothing to please Zetta, believing Marona to just be trying to curry his favor. Ash suggests that he missed Marona on purpose, which Zetta vehemently denies and prompts him to start the battle.

Upon defeat, he denies going easy on Marona, blaming his withered pages. Marona attempts to repair his battle wounds, but Zetta resists. However, in return for her kindness, he gives her a phantom image of himself before departing. 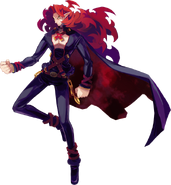 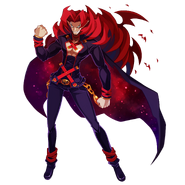 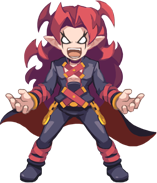