Yukimaru is a character in Disgaea 2: Cursed Memories. She is a kunoichi from the Snow Clan.

In the original Japanese tracks, Yukimaru speaks in an archaic form of speaking that often ends statements with the phrase "De Gozaru". To reflect this, the English tracks give her a formal and polite way of speaking, with a habit of ending her sentences with "zam". She is always polite, even to those she just met. Zam being contagious and her willingness to commit Seppuku are running gags throughout the game.

Fifteen years before the game's events, Yukimaru's village of Snow Melody was destroyed by Zenon during his search for Rozalin. Yukimaru, Fubuki and the village elder were the only survivors of the attack. After completing their training, the two set out to defeat Zenon. Adell and his party first meet her during chapter 6, as she is asking for directions to the colosseum. She reveals that Zenon was hosting a tournament, and the winners would get a chance to meet him. Yukimaru is also surprised to see Rozalin's eyes, claiming they have the same snowy glow as hers.

However, she seems to lack confidence, threatening to commit suicide if her mission fails. Adell breaks her out of this after defeating her in the semi-final match, and she joins the group. Later, during chapter 10, she reunites with her brother, Fubuki.

At the end of the storyline, she and Fubuki return to Snow Melody in an attempt to rebuild the Snow Clan. They also undo Tink's transformation spell, which she named "The art of the Henge".

Yukimaru will join the player's party immediately after completing the second map of Episode Seven. She has various Weapon Mastery levels already gained, allowing for intricate customization. She initially comes equipped with a Sword, but her weapon of choice is dependant upon the player's choices. All of her Special Attacks are Ice-based, so she fares well against Fire-alligned enemies. Her ability to cause Amnesia with attacks is also useful against enemy magic-casters, since Amnesia takes away their ability to cast their Magic. Her Aptitudes are somewhat low, however (120% in ATK and 130% in SPD) and, despite her potential for evasion, her stats are mediocre. Fifth and Sixth tier generic characters can easily become more powerful than she will be. However, a Reincarnation or two can possiby save her a spot the player's secondary support ranks.

Yukimaru is available as a downloadable character in Disgaea 3, along with Tink. Here, she is attempting to become a Bushido instructor, but the Disgaea 3 cast keep mistaking it for something entirely else, initiating the fight. 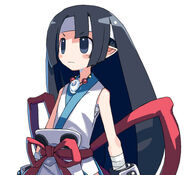 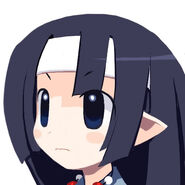 This article or section is a stub. Please help the Disgaea Wiki by expanding it, so it won't stay a little shrimp like Laharl.
Retrieved from "https://disgaea.fandom.com/wiki/Yukimaru?oldid=45932"
Community content is available under CC-BY-SA unless otherwise noted.