The Wood Golem is a Monster Class in Disgaea 3: Absence of Justice. It is described as a "manifestation of the land's anger" as it is the elements of the earth pooled into one, living, breathing monster.

Retaining its appearance from Disgaea 2: Cursed Memories, the Wood Golem is a gigantic monster. Its body appears to be made of dark-colored wood and is covered in a lighter-colored wooden armor, creating an outer "skeleton". It also has a bright bulb-like area on its head, glowing blank eyes, and a leaf on the back of its head, simulating a ponytail. Its gargantuan body is slow but devastatingly powerful and sturdy. Furthermore, due to its native Evility, Photosynthesis, it regains 10% of its HP at the end of each turn, making it even harder to defeat. It can also Magichange into a Fist Weapon. 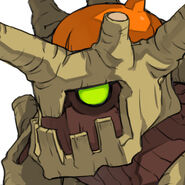 Wood Golem's Cut-In Image
Add a photo to this gallery

Retrieved from "https://disgaea.fandom.com/wiki/Wood_Golem_(Disgaea_3)?oldid=42857"
Community content is available under CC-BY-SA unless otherwise noted.