The Winged Warrior is a monster class in Disgaea 3: Absence of Justice. They are fast, flying insects often used as Netherworld Spies.

Retaining its design from Disgaea 2: Cursed Memories, the Winged Warrior is essentially a giant moth. It is very fast and can fly right past enemies, giving it wider movement in enemy filled areas than most units. It can attack using powerful Sonic Screeches which can disorient and confuse its foes. Furthermore, as it flaps its wings, dust comes off of them. It can use this dust to obscure the vision of nearby foes (as shown with its native Evility Flicker Wing, which increases the Winged Warrior's evasion rate while being attacked in Close Combat). 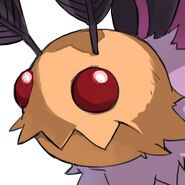 Winged Warrior's Cut-In Image
Add a photo to this gallery

Retrieved from "https://disgaea.fandom.com/wiki/Winged_Warrior_(Disgaea_3)?oldid=35761"
Community content is available under CC-BY-SA unless otherwise noted.