Vulcanus is an Archangel, effectively Seraph Lamington's second in command and the main antagonist of Disgaea: Hour of Darkness. Unlike Lamington, who is stoic and never raises his voice, Vulcanus is loud and brash. Like many of the angels in Celestia, he holds demons in contempt, believing them to be the source of all evil in the universe, and believes that humans are too stupid to live without the angels' guidance. This is in contrast to Flonne, who believes that any being, demon or otherwise, can hold love in his or her heart.

Vulcanus first appears in chapter 2, after Lamington sent Flonne to supposedly assassinate King Krichevskoy. Vulcanus demands to know if this is true, but to his iritation, Lamington confirms the former's suspicions. Following what he learns, he disappears, leaving Lamington to note that his hatred of demons, and his anger towards Flonne, is exactly why he is not fit for this task.

In chapter 4, he steals Flonne's pendant, intending for her to die in the Netherworld; however, the pendant burns his hand due to him having a wicked heart, causing him to drop it.

He is the cause of Carter's invasion into the Netherworld during Chapters 12 and 13, having given out information about the Netherworld (though proven to be false) and hiring out angelic sentries.

Near the middle of the final chapter, Vulcanus reveals that he's signed a contract with demons, which is a big taboo of Celestia. Despite this, Kurtis appears to help. Vulcanus' final stand is the second to last map in the chapter, where, after his defeat, intends to drag the Seraph into this. Regardless, Lamington reveals that he knew about everything Vulcanus has done, and turns him into a flower as punishment.

In the Good Ending, a figure that looks similar to Vulcanus is seen in an image in the credits taking lessons about love from Flonne, implying he was changed back.

In Etna Mode, he poses as God in order to trick Flonne into killing Etna. After Maderas is defeated, he kills the vampire and attacks Etna in the final map of the story. In spite of his efforts, he is defeated, and transported away where, as Mid-Boss says, he will be punished for his actions.

Vulcanus also makes an appearance during the Downloadable Content "Raspberyl Mode" of Disgaea 3: Absence of Justice. On the penultimate stage of Chapter 3 among the generic angels there is a "Flora Beast" type enemy named Vulcanus with the title "Former Archangel". His state is likely a reference to his transformation into a flower by Seraph Lamington at the end of Disgaea: Hour of Darkness. 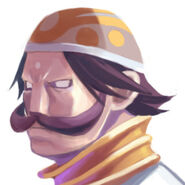 Vulcanus' Cut-in image
Add a photo to this gallery
Retrieved from "https://disgaea.fandom.com/wiki/Vulcanus_(Disgaea)?oldid=44321"
Community content is available under CC-BY-SA unless otherwise noted.