The Valkyrie is a Humanoid class in Disgaea 3: Absence of Justice and its remake, Disgaea 3: Absence of Detention. Retaining her design from Disgaea 2: Cursed Memories, she appears as young female demon. She wears a lot of armor on her lower body but wears very little on her upper body. In fact, the only armor she has on her torso is her signature "belt bra", a piece of clothing that has become popular with the fans of the series. Like the Warrior, she is meant to be a main offensive force; as such, the Valkyrie is good with close combat weapons like Swords and Spears. She can also use Bows, but she truly shines when using a Spear. Her native Evility, Assault Attack, increases her damage output by 10% for every space she moves in a turn. She can learn all 6 Spear moves. 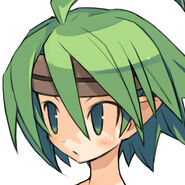 Valkyrie's Concept Art
Add a photo to this gallery
Retrieved from "https://disgaea.fandom.com/wiki/Valkyrie_(Disgaea_3)?oldid=35455"
Community content is available under CC-BY-SA unless otherwise noted.