The Valkyrie (also known as Female Warrior and Lady Fighter) is a recurring class in the Disgaea series first introduced in Disgaea: Hour of Darkness. They are essentially a female variant of the Warrior class.

Valkyries are female humanoids who have spiky hair with a cowlick at the top, wear iron boots, and wear shorts. They also wear two belts attached together like a bra, as arm bands, and on their pants.

In their default color, they are light skinned with green hair, their belts are brown, their pants are black, and their boots are white iron.

It is rare for a demon to have the potential to become a Valkyrie, but those with potential are taken in as the single apprentice of a retired Valkyrie and are then known as a "Liebe". The Liebe then goes through tough and intensive training which teaches them fighting and survival skills. Due to the hardships associated with their training, Valkyries tend to have a tough personality. Magic Knights are said to be a subgroup of Valkyries.

Valkyries are the generic physical attack class, who are easily trained to use a sword or axe.

Named the 'Warrior' in this game, this fighter specialized in the use of Swords and Spears. They are used to unlock the Strider, Thief, Knight, and Samurai classses.

The Valkyrie in this game is known as the Fighter. On top of keeping her mastery of swords and spears, she also gains the ability to use Bows efficiently. Her Special ability raises the chance she'll score a critical when her HP falls below 25%.

The Valkyrie still keeps the use of Swords, Spears, and Bows. Her Evilty increases damage for every space she moves in that particular turn.

The Valkyrie returns as one of the starting classes.

The Valkyrie is one of the initial classes made available for creation.

The Valkyrie returns in Disgaea 5, again as a starting class.

The Warrior in Makai Kingdom is most proficient with Daggers, Swords, Rapiers, and Spears.

In Norse mythology, a Valkyrie is a "Chooser of the Slain", selecting those who die valiantly in battle and sending them to Valhalla, where they become Einherjar. 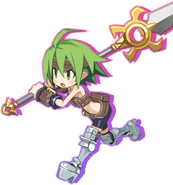 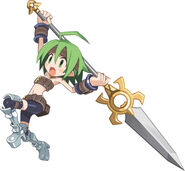 High-resolution Valkyrie sprite
Add a photo to this gallery

Retrieved from "https://disgaea.fandom.com/wiki/Valkyrie?oldid=48180"
Community content is available under CC-BY-SA unless otherwise noted.