The Undead is a monster class in Disgaea 3: Absence of Justice. They are the dead brought back to life, filled with a hunger for flesh.

Retaining their appearance from the last 2 games, the Undead is a reanimated demon corpse. It has blank eyes, several fangs, claws, a horn, a shoe on their right foot and "Flame Shaped" hair on the back of their heads. The Undead are known for being dumb and slow but they contain a rather dangerous amount of power. Their status as undead make them completely ignore most physical injuries and they attack relentlessly. Although they are slow, they are unusually accurate with their attacks once they have you in their sights. Furthermore, they can regain health and power by devouring the flesh of others (as shown with their native Evility Corpse Eater which recovers their HP and SP if they kill an enemy with a Normal Attack). The character Aramis has countless Undead as pets. Although Undead are considered unintelligent, some retain their ability of independent thought and some can even speak in fluent and coherent sentences. 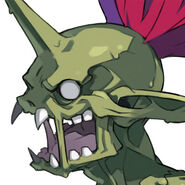 Undead's Cut-In Image
Add a photo to this gallery
Retrieved from "https://disgaea.fandom.com/wiki/Undead_(Disgaea_3)?oldid=36041"
Community content is available under CC-BY-SA unless otherwise noted.