Tink is a playable character in Disgaea 2: Cursed Memories.

Tink was Rozalin's servant and childhood friend before the summoning spell brought her to Adell. Tink was turned into a frog by Fubuki who attacked Rozalin's mansion in search of Zenon. He then follows the party around, joining officially as of Chapter 2. At the end of Chapter 7, he is posed as by Fubuki, who was using a Henge art to disguise himself as Tink. However, the real Tink and the Masked Woman show up in time and save Rozalin from possible doom. In the official ending of the game, his transformation is undone and he returns to normal. His normal form shows him as a Humanoid demon with blonde hair and eyes. He is also seen wearing a Tuxedo.

Tink actually has two distinct personalities represented by his color. He has his red personality, which is lecherous and rude (said to only like women 18 through 49). He also has a blue personality which is polite and kind (in demon terms). He can be forced to switch personalities with the spell "Draak-Tink-Mahalaak"

Noticeably, the Disgaea 2 Art book had designs for a third personality, where he would turn black and become "battle ready".

Tink acts as a Monster parallel to Adell, excelling in ATK strength and Counters (though Taro outshines Tink in the Counter and DEF department). He has somewhat low HP and DEF in exchange for a really high SPD, so if he's fighting by himself against evenly leveled enemies, he may not last too long. Tink's main role in battle is in the role of a support unit, aiding female units in attacking. Whenever Tink is in is red form, he will gain a stat boost when next to allied females (not counting Rozalin's "Boost Male Units" ability). Tink can be powered up to an apocalyptic degree by having three Beast Masters (their levels and Tiers do not matter) surround him as he close in to attack enemies (note: Tink must be in his red form to gain both of the stat boosts, otherwise, he will simply gain the "Power Monster Unit" boost from the Masters, instead of both the "Female" and "Monster" boosts). If Tink is in his blue form, then his role changes to that of an Item World clearer, his high MV range (which increases by 2 when in his blue form) making Item World trips faster due to his "flying" movement type and high MV count.

Kero Change: Switches between his blue and red forms. In blue (default), he gains a movement boost. In Red, he gains extra attack and gains even more if he's standing next to a female. Combining this with both Rozalin and a Beast Tamer's abilities can boost his damage potential.

Sonic Roll: An homage to Sonic the Hedgehog. Tink curls into a ball (with a graphic looking very similar to the Sonic spindash) and dashes forward, damaging enemies in a straight line before unfurling.

Nail Bat: Tink pulls out the bat and strikes the enemies multiple times.

Goodbye Tink: Tink blows himself up, damaging enemies around him (a reference to Chiaotzu from Dragonball Z as "goodbye Tien" is said before he self-destructs to injure Nappa). This move causes Tink to lose all his HP and be removed from the battle.

Tink's normal form.
Add a photo to this gallery 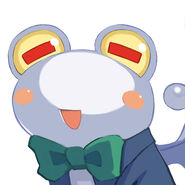 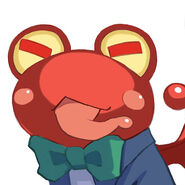 Tink's "bad" portrait.
Add a photo to this gallery
Retrieved from "https://disgaea.fandom.com/wiki/Tink?oldid=48921"
Community content is available under CC-BY-SA unless otherwise noted.