Thursday is a recurring character in the Disgaea series. Since being built by the genius martial artist Jennifer when she was 5 years old, Thursday the All Purpose Robot has always been by her side.

Working together with both Jennifer and Gordon, he has become a powerful force on their team. When Gordon is sent out to defeat the Overlord, Thursday willingly joins his struggle.

Their ship crash lands in the Stellar Graveyard, leaving them stranded within the Netherworld. Thursday and Jennifer get separated from Gordon. They meet Laharl's party and join with them to find Gordon. When they find him, Thursday and Gordon engage in a challenge with Laharl and lose. Then, Gordon becomes Laharl's new servant.

Jennifer and Thursday quickly grow accostumed to the life in the Netherworld. After go to the 'Forest of the Dead' after a new Defender of Earth challenge, Don Joaquin suddenly attacks Gordon but Thursday saves him and takes the full force of the attack. Thursday begins to malfunction. The attack he took from Don heavily damaged his memory circuit, and he could lose all his memory if he overheats. To top it off, Jennifer is unable to fix Thursday without the proper equipment. When Gordon tells Thursday he's going to have to sit it out, Thursday objects, telling them that "to lose his memory would be sad, but to be useless would be even more sad", and that he must fight. Gordon feels touched by it, and allows Thursday to continue to fight.

After the fight with Don Joaquin, Thursday begins to overheat. As Jennifer and Gordon try to tell him to save his energy, Thursday thanks them for the memorien, then shuts down. Don notes to Gordon how he has such wonderful friends, and that maybe if he (Don) had had friends like that, maybe things would have been different. Don fixes Thursday in a flash of white light and his soul finally achieves peace.

He returns in Disgaea 2 with Gordon and Jennifer.

Thursday transforms into his flying saucer mode and Jennifer shoots him into the sky. Kurtis and Gordon add their velocity to Thursday, and the trio fly straight into the group of Kurtis clones. Like Jennifer, he is knocked out after that and doesn't participate in the battle.

He, along with Jennifer and Gordon, appears as a DLC in Disgaea 3. In it, he attempts to be a teacher. The reason for this is that Gas Prices are high and he needs money to buy fuel for himself. Mao challenges Thursday to battle, saying that if Thursday can beat him, he can become a teacher. Thursday then prepares for battle (while also targeting Almaz). Afterwards, Mao doesn't let him be a teacher but still hires him as a research assistant (while secretly planning to modify him into a super weapon). In battle, Thursday can Magichange into a Bow (one would expect a gun).

Despite being a robot, Thursday seems to have a heart. Even if he is severely damaged and on the verge of breaking down, Thursday continues to fight alongside Gordon and bring about justice. He also seems to be very calm when dealing with various obstacles and can be very sarcastic at times. Thursday usually begins or ends his sentences with "beep beep blip beep". 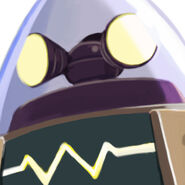 Thursday battle cut in
Add a photo to this gallery
Retrieved from "https://disgaea.fandom.com/wiki/Thursday?oldid=47739"
Community content is available under CC-BY-SA unless otherwise noted.