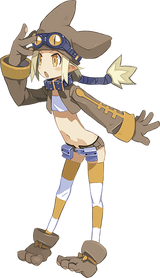 The Thief is a humanoid class in Disgaea D2: A Brighter Darkness.

The Thief is unlocked once a Male or Female Martial Artist reaches Level 5.

The Thief is one of the most useful classes in the game. While all units in Disgaea D2 are able to steal items at the same rate, the Thief can uniquely steal stats as well without needing a Hand item due to her Stealing Hand skill which increases in range the higher its level is.

Stat-wise, the Thief is built around mobility. High MV, Jumping power, and preference for long-range weaponry makes the Thief perfect for big maps. High HIT and extraordinary SPD make Guns perfect weapons for Thieves, though a moderate ATK growth also allows for Bows as well. The Thief is not built for taking punishment, as low DEF and HP make them extremely squishy units.

The Thief's Evilities are focused on extra gaining of rewards. These range from increasing items in Treasure Chests she opens by 3 Ranks to turning any defeated enemy into a Chest.

“A thief dedicated to acquiring treasures. Doesn't lose it when it comes to stealing.”
—Job Description, Disgaea D2: A Brighter Darkness “In the Netherworld, stealing is revered. The Thieves' Guild is the largest trading union in the Netherworld, and can be hired to steal anything. In recent years, on top of stealing expensive items, they have found ways to steal the emotions and abilities of people. Very few have ever earned the title of Thief King. The rare few live on as legends in people's minds.”
—Disgaea D2: A Brighter Darkness

Trickster's Cut-in image in Disgaea D2.
Add a photo to this gallery
Retrieved from "https://disgaea.fandom.com/wiki/Thief_(Disgaea_D2)?oldid=44405"
Community content is available under CC-BY-SA unless otherwise noted.