The Thief is an unlockable class in Disgaea: Hour of Darkness and its remakes. It is easily the weakest class in terms of beginning stats, aptitudes, and Weapon Mastery, with the beginning tier only getting 40% in Defense aptitude, and the only two stats getting 100% being Speed and Hit. Even the last tier will only reach 60% or 70% in aptitudes, save for the two previous mentioned stats.

And many players can take care of the thief's disadvantages later on in the game, by giving a high level Armsmaster to the thief's weapon, their Weapon Mastery speeds up. Stats can continue to grow by Reincarnating the thief multiple times. One can also reincarnate a character who already masters a weapon into a thief.

A level 200 thief is required in order to unlock the Majin class.

Though a male class in most versions of the first Disgaea game, these thieves were replaced by their female counterparts from later games in the series in Disgaea 1 Complete.

Stealing is officially recognized as an advanced technique. The Thieves' Guild is the largest organization of the Netherworld. Thieves will steal anything by request, and anyone can join the Thieves' Guild as long as they have the skill. The most legendary of them all is known as the "King of Thieves." 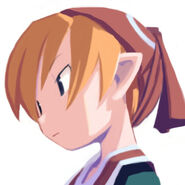 Thief's Cut-In Image
Add a photo to this gallery
Retrieved from "https://disgaea.fandom.com/wiki/Thief_(Disgaea)?oldid=47608"
Community content is available under CC-BY-SA unless otherwise noted.