The Thief is a recurring humanoid class in the Disgaea series first introduced in Disgaea: Hour of Darkness.

In Disgaea: Hour of Darkness and its early ports, the Thief was portrayed as a male human with a hat, small boots, and a strange shirt.

In his default coloration, the Thief wears a red hat.

In her default coloration, the modern female Thief's clothes are mostly colored brown. They wear yellow and white striped socks, have tan hair, and have red eyes.

Stealing is regarded as an advanced technique, so the Thieves' Guild is the largest in the Netherworld and is dedicated to preserving the advanced techniques of stealing. Thieves will steal anything by request and can even steal things not visible to the naked eye, such as emotions. Legend speaks of a legendary Thief King, though it is also suggested that this is a title taken on by skilled Thieves.

They specialize in stealing equipment from other characters in all games they appear in.

The Thief first appeared in Disgaea: Hour of Darkness as a male class. They had horrible Stats, Aptitudes, and Weapon Mastery levels, easily making it the worst class to try and train to keep levels up, as well as learning new skills in order to be able to defend itself. A level 200 Thief is required in order to unlock the Majin class.

The Thief returns in Disgaea 2, now as a female class. In this game, they have better stats, aptitudes, and weapon mastery levels than the Disgaea incarnation. On top of that, a Thief's Lover in this game allowed it a better chance to steal items from enemies.

Thieves in Disgaea 2 are able to learn skills on their own. These skills do not cause any damage, but rather cause a status effect to one unit. These skills can allow for the destruction of enemies of far higher strength than themselves by putting enemies to sleep and then poisoning them, allowing for easy "cheesing" of battles.

The Thief in Disgaea 3 is much like the Disgaea 2 Thief, save for now they have only two skills, 'Create Box', and 'Create Barrel'. A level 15 Thief is required in order to unlock the Gunslinger and Gunner classes.

The Thief returns in Disgaea 4, with much of the same role as prior games and the same skills as in Disgaea 3.

The Thief returns in Disgaea 5.

Makai Kingdom Thieves, much like the Disgaea Thieves, have bad combat stats, but they have a good Jump and Move stats, a large number of available item slots, and are the only class which can use UFO's, the weapon that is required in order to steal items from enemies.

The Thief of Soul Nomad is known as the 'Bandit'. While it is unknown if a Bandit has a better chance of stealing from the enemy than any other squad, the Bandit is best known for having a high speed, causing most attacks to miss them, and also for its squad leader tactic of 'Fade Out', which makes it invisible to enemy forces until it attacks, uses a Gig Edict or another tactic, or an enemy steps next to them.

Its special attack when it is the leader is known as the 'Lupin Snatch', a possible tribute to Lupin III, a famous anime thief. The attack targets the enemy squad's leader. 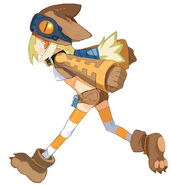 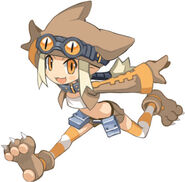 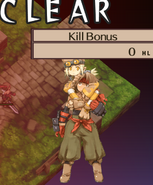 below the "Kill Bonus" on the 2nd map of Disgaea 2 is an image of the warrior giving the thief a piggyback ride
Add a photo to this gallery
Retrieved from "https://disgaea.fandom.com/wiki/Thief?oldid=51254"
Community content is available under CC-BY-SA unless otherwise noted.