The Guided Fate Paradox is a dungeon-crawler role-playing game made by Nippon Ichi Software. It was released in Japan on January 24, 2013, in North America on November 5, 2013, and in Europe on October 28, 2013.

The game is described to be a spiritual successor to Zettai Hero Project: Unlosing Ranger VS. Darkdeath Evilman.

The game begins when a young man named Renya wins a lottery drawing at the mall that grants him the powers of a God. He is transported to Celestia and is assisted by an angel named Liliel and her angel co-horts in altering the realities of those people who pray to him.

He must enter a machine called the Fate Revolution Circuit to aid those individuals who pray for his assistance. Within the machine, Renya can vanquish thoughts in their mind which manifest as monsters to help them overcome whatever doubts and insecurities they may have and essentially change their life for the better.

The gameplay is similar to Zettai Hero Project: Unlosing Ranger VS. Darkdeath Evilman, in the respect that players control a Hero within a dungeon crawler setting. The Hero is also followed by a partner Angel, with each partner Angel possessing their own unique abilities to aid the player in changing someone's fate. Players will be able to customize the Hero and his partner Angel with various pieces of Armor, Weapons and even special Prinny equipment to alter their abilities and parameters. 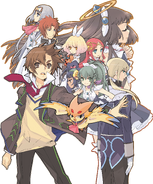 Cast of The Guided Fate Paradox.