Wendee Lee
Taro is a resident of Holt Village, and later becomes an admirer and servant of Rozalin. This admiration goes so deep that his title is "Rozy's Slave". Like his younger sister Hanako, Taro was born as a full-fledged demon because their parents Dad and Mom had become demons years prior to their conception.

Taro is cowardly and sarcastic, yet he is able to muster up enough courage to help out his older brother Adell. While he may be picked on by his younger sister, he'll team up with her occasionally to poke some fun at Adell.

His design is very "cow-like", which include his horns, his cow print apron or shirt, and his milk-based attacks.

Taro and his younger sister Hanako are demons, having been born after their parents were cursed. He has a set of horns, as well as clothing that looks cow-like. He starts to admire Rozalin soon after meeting her, and refers to her as Princess. He is not as confident as the other characters, but he tries to help as much as he can. He is also commonly referred to as Tardo (タローちゃん Taro-chan in Japanese) by his sister, Hanako. He joins your party after chapter 5-4.

In the Good Ending, he does not appear, but received a letter from Hanako after she leaves to join Laharl and Etna. In the Worst Ending, he is gruesomely devoured alongside Hanako by a Zenon-possessed Adell.

Despite being an eleven-year-old demon, Taro has remarkable stats. In addition to having good HP, Defense, and Resistance, Taro comes with four counters. This almost ensures that Taro will get the last hit when he is attacked or counter-attacked. These high stats also make Taro a perfect lure or front man to use in battle. Taro's specials boosts his own stats and recovers his HP. Like his sister, Taro's final special attack weakens an enemy's stats and also hits every unit around him.

As a downloadable character in Disgaea 3: Absence of Justice, some players have noticed Taro's basic attack (pummeling called Cry Baby Strikes) is severely crippled, doing a fraction of what it did in Disgaea 2. He has also lost all of his unique 'Milk' techniques, however, they have been replaced with moves such as Long Long Horn and Taro Buster. His two unique evilities also point more towards the idea that Taro is meant to be a brick wall, rather than a offense unit.

Taro appears as an obtainable character. 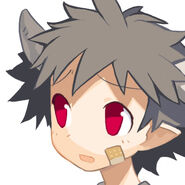 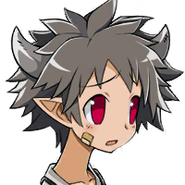 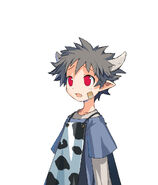 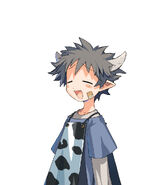 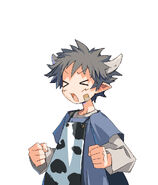 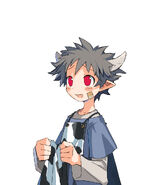