The Succubus is a Monster class from Disgaea 3: Absence of Justice. Although there has been a Succubus Class in every Disgaea game since Disgaea: Hour of Darkness, The Disgaea 3 Succubus differs from the classes in Disgaea and 2, altering the class's skill list and the class's overall design.

The Succubus appears as a sexy female demon with long flowing hair, horns, a tail with a heart shape at the end, a skimpy one piece outfit, detached sleeves, thigh-high stockings, high heeled platform shoes, and rather large breasts. The Succubus tends to act playful and innocent by sexually tempting the students, but she can be quite deadly in battle. The Succubus also has a rather impressive intellect and can control various forms of Magic such as Fire and Healing. Due to their Sexy Bodies and Flirtatious nature, men have a great degree of difficulty trying to fight them and often pull their punches (as shown with her native Evility, Sexy Aura, which decreases the stats of adjacent enemy male units by 20%). 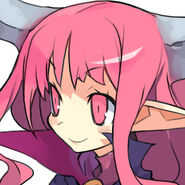 Succubus's Concept Art
Add a photo to this gallery

Retrieved from "https://disgaea.fandom.com/wiki/Succubus_(Disgaea_3)?oldid=38108"
Community content is available under CC-BY-SA unless otherwise noted.