The Succubus is a recurring monster class in Disgaea 2: Cursed Memories and its remake.

They will change appearances depending on a man's taste, so no one knows what their true form looks like.

Their special ability allows them to deal +25% damage to humanoid males; Lover specialists increase this by +1% per Lover level.

The Succubus is a female Monster whose claim to fame is the ability to drain life from it's foes. All but one of it's Special Skills has the Drain effect, which allows the user to recover HP equal to the damage dealt to the enemy.

As far as raw stats go, the Succubus' high INT/RES greatly pushes her in the direction of magic-casting. Of course, like many INT-based classes, the Succubus' physical defense is non-existent and remains so throughout her Tiers, so front-line combat is generally ill-advised. While INT-based Monsters like the Succubus will never stack-up to a Mage or Skull with maxed-out Staff Mastery, A monster that can wield life-draining abilities alongside Magic spells taught VIA Extra Gain can still sustain itself very easily during the early Post-Game; remaining an excellent supporting attacker from then-on.

It should be noted that Succubi make excellent candidates for Extra Stages, as more than half of the game's Extra Stage bosses are Male. 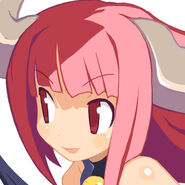 Succubus's Cut-In Image
Add a photo to this gallery
Retrieved from "https://disgaea.fandom.com/wiki/Succubus_(Disgaea_2)?oldid=44505"
Community content is available under CC-BY-SA unless otherwise noted.