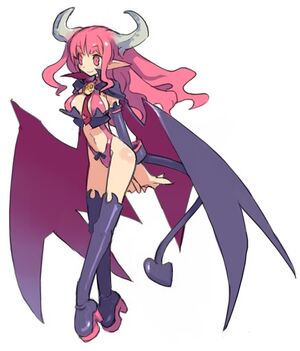 The Succubus, also known as Empusa, is a recurring monster class in the Disgaea series first introduced in Disgaea: Hour of Darkness.

They are female humanoid looking demons with large exaggerated breasts. They have two curved horns on their heads, long pointy ears, large bat like wings, and a long but thin tail that ends in a heart shaped tip. They wear scant clothing that only covers part of their body.

In games before Disgaea 3: Absence of Justice, they have tails that end in a triangle tip and have thicker legs than their current appearance.

However, this may not be their true form, as they can change their appearance to appeal to a man's tastes, and descriptions claim no one has seen their true form.

Powerful and beautiful, Succubi are female demons who live by seducing men and it is doubtful that any can resist their power. They get along with Felynn, who are similar in appearance to Succubi but have cat like features.

No one has seen their true form as they change their appearance to appeal to a man's tastes.

In the original Disgaea, Succubi, as evident in Chapter 5, are one of Laharl's big weaknesses, being very busty. Their abilities include both physical and magical ones. In the updated ports of the game, a Succubus named Antoire joins Etna's group in Etna Mode.

In Disgaea 2, Succubi first appear in chapter 5, in the Cavern of Evil. Their innate ability is to deal more damage against male opponents. They also have a high INT, which makes them one of the best monster casters in the game (along with the Spirit class for other reasons).

A Succubus named Elenor has a small history with Adell, as he went to her to find out more about his parents. However, she tricked him and nearly killed him, which resulted in the scars on his face. She later appears in Chapter 6, but was defeated by Adell.

In Disgaea 3, Succubi recieved a redesign, looking more slender. Their evilities have been changed around to give them a higher advantage against males, cutting their stats when in 1-panel range and receiving less damage. They are also a group in the Classroom Assembly, with their preferred bribery item being belts, although sweets also secure the deal. They vote favorably toward males.

The Succubus is a class designed as a "Jill-of-all-trades" of INT-based combat. With Elemental spells (primarily Fire), healing spells, and status spells, the Succubus has a wide array of abilities to choose from; with matching Aptitudes in INT, ATK and RES. This makes her an excellent supporting character against physical attackers, while being less effective against Magic-casters.

One of the game's main characters, Seraphina, is stated to be a Succubus, although she is not a monster-type and has her own unique character class instead of the Succubus monster class. In addition, she has a completely different appearance from a Succubus.

Prinny: Can I Really Be the Hero?[edit | edit source]

Succubi are flying enemy who harry the Prinnies with heart-shaped attacks, mainly bombs (with lit fuses), but on occasion also throw out a large heart-shaped blast of energy that homes in on the Prinnies. In this game, there also appear Liliths, who appear to be younger versions of the Succubi, but in reality are actually boys.

Succubi and Liliths reappear as enemies in Succubi Tower along with a new version of Succubi called Lillims that sometimes teleports around and often attack nude (but covered) with bats that home in on the Prinnies.

High-resolution Succubus sprite
Add a photo to this gallery
Retrieved from "https://disgaea.fandom.com/wiki/Succubus?oldid=48476"
Community content is available under CC-BY-SA unless otherwise noted.