The Strider is an unlockable class in Disgaea: Hour of Darkness and its remakes. It has an excellent Weapon Mastery with Guns, and a nice movement and jump range, but what makes it unique is its two special abilities, Geo Change and Dark Cannon. Note that while Striders are strong at long-range, they are mincemeat at close-range. Therefore, the player should take care to leave their Striders next to their Healers and/or Mages, out of harm's way and ready to be supported.

Geo Change can be a useful ability to get rid of certain Geo Effects in the Item World such as Invincibility or Ally Damage 20%. In later games, the Strider is replaced with the Geomancer and Onmyo Monk classes, which also have Geo-changing abilities, and the Thief occasionally picks up the not-terrible-with-guns element.

A level 200 Strider is required in order to unlock the Majin class.

Striders have the ultimate power in a way, since they can control terrain. Most of the Netherworld's residents look down on them. They have a child-like curiosity and speak in a dialect unique to their underground cave villages. No one is as skilled in guns as they are.

Note: Each ability can only be used once per Strider per map. 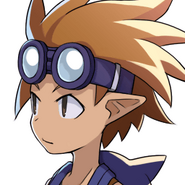 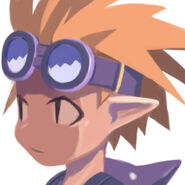 Concept art of the Strider
Add a photo to this gallery
Retrieved from "https://disgaea.fandom.com/wiki/Strider?oldid=44959"
Community content is available under CC-BY-SA unless otherwise noted.