The Spirit is a Monster Class in Disgaea 3: Absence of Justice. They are spectral beings that are said to be the soul of a dead human that didn't become a Prinny, but was unable to move onto the Afterlife.

Retaining its design from the previous 2 games, the Spirit is a white creature wearing a tattered hooded cloth that has a long, curved string-like part sticking out of the top. It has no real facial features other than two holes where the eyes should be. The Spirit also has no legs. Their bodies give them a lack of any physical combat abilities, but Spirits can use powerful Magic. Their bodies naturally generate the power needed to use their magic (as shown with their native Evility 'Magic Creation' which recovers 10% of their SP at the end of every turn). 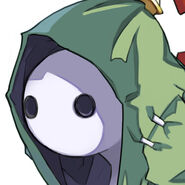 Spirit's Cut-In Image
Add a photo to this gallery

Retrieved from "https://disgaea.fandom.com/wiki/Spirit_(Disgaea_3)?oldid=35914"
Community content is available under CC-BY-SA unless otherwise noted.