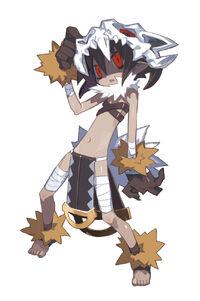 The Sorcerer is a recurring humanoid class in the Disgaea series first introduced in Disgaea 3: Absence of Justice.

Sorcerers are messengers of curse who spread bad luck and unhappiness. They are followers of Dolvalky, Deity of Despair and Unhappiness, and believe that their god has given them the right to control the good and bad in the world. They are always in costume, due to having to conduct a daily ritualistic festival in their village to heighten their powers. Despite their differing ways, they often communicate and trade information with the Onmyo Monks. Many visit them to borrow their power, even coming from as far as the human world.

Sorcerers were originally introduced in Disgaea 3, unlockable after having both a level 25 Geomancer and Mage/Skull.

The Sorcerer is unlocked by having both a level 15 Mage and Skull.

The Sorcerer reappears in Disgaea D2.

The Sorcerer appears in Disgaea 5 as a DLC class.

Retrieved from "https://disgaea.fandom.com/wiki/Sorcerer?oldid=46179"
Community content is available under CC-BY-SA unless otherwise noted.