The Sludge is a monster class in Disgaea 3: Absence of Justice. It is a rather primitive monster, but quite difficult to get rid of.

The Sludge, as its name suggests, is a giant blob of sludge composed of unknown material. They come in a variety of colors, but all of them have a horned skull on their (assumed) head area. It is unknown whether or not this is actually their skull or just one they found. The Sludge is one of the newer monsters and one that the player can access pretty early in the game. Despite being an early class, the Sludge has an unusually high Defense aptitude. Coupled with its native Evility, Gel Body (which cuts the damage received by non-elemental attacks in half), the Sludge is almost unstoppable by using only physical weapons. However, despite its enormous Physical Defense, its Magical Resistance isn't very good, meaning spell-casting can easily put a stop to them. 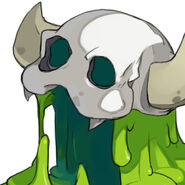 Sludge's Cut-In Image
Add a photo to this gallery

Retrieved from "https://disgaea.fandom.com/wiki/Sludge_(Disgaea_3)?oldid=35441"
Community content is available under CC-BY-SA unless otherwise noted.