The Skull in Disgaea is the male magic user. The Skulls are terrible at using any weapon besides the staff, which enables them to sling power magic. The only difference between a Mage and a Skull is an Aptitude difference between Speed and Hit (the Skull has better hit).

What kind of Skull the player makes determines what magic the Skull will learn: Red is fire, Blue is Ice, Green is wind, and Orange is star. Note that the Prism Skull can learn Fire, Wind, and Ice Magic, and the Galaxy Skull can learn Fire, Wind, Ice, AND Star, but both can only learn up to Omega spells. Only the basic Red, Blue, Green, and Star Skulls can learn their respective Tera spells (Tera Fire, etc.)

Be wary of the Skull, however. While being a heavy hitter with magic, they are often weak in defense, along with having very little HP to back them up. Players should keep this weakness in mind when facing enemy Skulls in the Item World.

Many players often equip their own Skulls with Muscles to improve the chances of the Skull living, should the Skull be hit.

Strong spiritual power is required to use magic, and the skulls' unique costume is designed to strengthen their concentration. Their strange cry is a sign of their trance-like state, and it shows that their concentration is at its peak. At times, this concentration power can reach higher than 200 Polga.

All Mage Spell Ranges are dependent on Staff mastery and skill level. 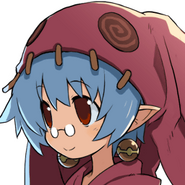 Red Skull Cut-In image
Add a photo to this gallery 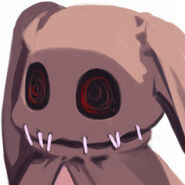 Skull's Artwork
Add a photo to this gallery
Retrieved from "https://disgaea.fandom.com/wiki/Skull_(Disgaea)?oldid=46508"
Community content is available under CC-BY-SA unless otherwise noted.