The Shroom is a monster class in Disgaea 3: Absence of Justice.

They aren't relatively strong, but they do sport an even split of offensive and defensive power. Unfortunately for them, magic just spells doom for them (most prominently, Fire magic). However, one unusual ability Shrooms have is that they release a strange kind of pheromone that causes an allergic reaction in girls, causing them to feel ill (as shown with their native Evility, Shroom Power, which decreases the stats of adjacent enemy females by 20%). 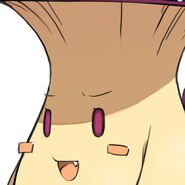 Shroom's Concept Art
Add a photo to this gallery
Retrieved from "https://disgaea.fandom.com/wiki/Shroom_(Disgaea_3)?oldid=35858"
Community content is available under CC-BY-SA unless otherwise noted.