Shadows are a type of monsters that only appeared in Disgaea: Hour of Darkness. They are essentially stronger and sturdier versions of Spirits. They use mainly fire and ice elemental spells.

One of their most important appearances in the game is in Episode 8, where they are seen leading the Prinnies' souls into the Red Moon. 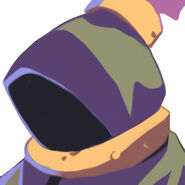 Shadow's Concept Art
Add a photo to this gallery
Retrieved from "https://disgaea.fandom.com/wiki/Shadow?oldid=45630"
Community content is available under CC-BY-SA unless otherwise noted.