The Serpent is a monster class in Disgaea: Hour of Darkness and its ports. They resemble anthropomorphic shark-like creatures and are similar to dragons.

A rare, shark-type dragon. One theory says that they are a foreign species that came from another Netherworld. They are extremely aggressive and seek their prey throughout the Netherworld. Unless you're very confident in winning, you should avoid fighting them in all costs. 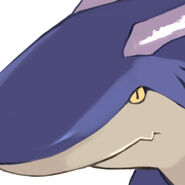 Serpent's Concept Art
Add a photo to this gallery
Retrieved from "https://disgaea.fandom.com/wiki/Serpent_(Disgaea)?oldid=45653"
Community content is available under CC-BY-SA unless otherwise noted.