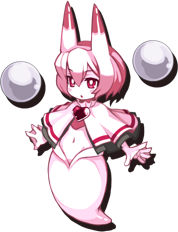 Sea Angel is a Monster class introduced Disgaea D2: A Brighter Darkness. They essentially serve the same role as the Cheerleader class and Professor class from previous games, having access to and possessing the unique buff skills that those classes had possessed prior.

Originating from microscopic sea animals, Sea Angels came into existence due to polluted waters. Their bodies are semi-transparent. They are shy and cowardly, and usually travel in large groups. They usually stay underwater except to feed. When they eat, they release tentacles from their heads, grab their food, and slowly pull it back into the water.

The Sea Angel acts as a "utility mage." Rather than relying on Healing and buff spells, Sea Angels use spells that increase technical stats, such as MV and Throw range. Sea Angels are the only characters in the game capable of using such skills other than the Unique character Lanzarote.

Stat-wise, the Sea Angel has the lowest HP Aptitude of any other creatable class. This, coupled with horrible DEF and SPD makes them very easy enemies to kill with physical attacks. RES and INT serve as their strong stats, making them excellent Magic-casters given their proficiency with Ice Spells.

The Sea Angel also possesses the same attack range as a Spear, allowing them to attack any unit two Panels away from them when using regular attacks.

The Sea Angel is a class best served buffering other characters,as sending them out alone is a quick way to get them dispatched.

Evilities grant increases to technical rewards such as EXP and Mana. These range from a 10% increase in HL gain, to 10% increase in Mana Gain. These Evilities are stackable, meaning that multiple Sea Angels add 10% to the already established bonus per unit. (I.E: 5 Sea Angels would grant a 50% bonus to whatever-have-you)

Also, like all other Monsters, the stat used to determine their Special Attack damage is determined by what type of Monster Weapon they have equipped.

“A demon who lives in the water. Increases the stats of her allies.”
—Job Description, Disgaea D2: A Brighter Darkness

Erato's Cut-in image in Disgaea D2.
Add a photo to this gallery
Retrieved from "https://disgaea.fandom.com/wiki/Sea_Angel?oldid=44398"
Community content is available under CC-BY-SA unless otherwise noted.