Wendee Lee
Rutile (ルチル Ruchiru) is a character in Disgaea 3: Absence of Detention and Disgaea 4: A Promise Revisted / Complete+. She comes from the human world and she’s half human and half Felynn. Since she’s from the human world, Rutile doesn’t know much about the Netherworld, resulting in her transferring to Evil Academy to learn about the ways of a demon. The 15-year old girl has a gentle personality, and comes off as a trustworthy person. Rutile is much more of a "delinquent" than Raspberyl, it seems. Because of being half Felynn, Rutile has an unusual amount of strength, which she is afraid to use as she is worried she might hurt somebody.

Rutile has light blue hair that she keeps in a ponytail and orange eyes. She wears a white sailor outfit with a large cat bell hanging around her neck, black shorts, a pair of blue socks, and brown shoes.

Rutile is kind, honest, and trustworthy, while this is one of the reasons she couldn't fit in with the other students in the Evil Academy. The first thing she did was pay her school tuition, which surprised and angered the school officials. She also tried to pay the fees for her school lunches, but was rejected. On the other hand, she gained the friendship of Raspberyl, Almaz, and Sapphire. Even with her small, cute and defenseless appearance, she is surprisingly strong, due to the fact that she is half Felynn. This is also one of her worries, believing that she is most definitely capable of hurting some one.

Rutile is a shy young girl from the Human World who has a Human father and a Felynn mother. She had trouble making friends at school and even accidentally hurt some of her fellow students with her Felynn strength. Her parents then recommended going to a Netherworld school instead.

Rutile transferred to Evil Academy from the Human World (causing quite a commotion by doing such things as paying her tuition early). She eventually goes to her first class and meets Mao and the group and after her sky introduction and a "Welcome to Evil Academy" battle she became friends with Sapphire, Almaz and Raspberyl (even offering to care for Raspberyl's wounds). Mao however was skeptical of her true intentions and sent her to clean the Senior Classrooms as a way of scaring her off. The others however were not pleased with this and ran off to help her.

Mao and the others eventually find her, however all of them (including Master Big Star and Salvatore) get locked inside the Detention Room. After dealing with the detained students, Rutile uses her Felynn strength to bust down the door, letting them all out. However, they realize that the Dean's Certificate for Evil Academy was stolen while they were in there and Rutile volunteers to help get it back. The group eventually gets it back and also find the culprit, a demon from Majin Academy named Stella Grossular. After defeating Stella's minions, it is revealed that Rutile is a friend of Stella and was actually working for Stella to steal the certificate to Evil Academy. However, as Stella and Rutile were leaving, Rutile had a look of sadness and regret on her face, showing she took no enjoyment out of stealing the certificate or betraying her new friends.

Mao and the others eventually find Majin Academy and soon realize that Stella is just abusing their friendship to get Rutile to do whatever she wants. Almaz, Sapphire and Raspberyl soon convince Rutile to come back to their side and Rutile tries to convince Stella to return the certificate. Stella refuses and feels betrayed, declaring she never wants to see Rutile again.

Rutile then joins with Mao's group as she tries to convince Stella to give the certificate back. In doing so, she slowly starts learning what Stella has been going through and also learns about Stella's jealousy towards Rutile's relationship with her father. After Stella is defeated on the roof of Majin Academy, Rutile finally gets Stella to calm down and the two rekindle their friendship. The two of them then transfer to Evil Academy and start anew.

Rutile, along with Stella, are optional playable characters in both re-releases of Disgaea 4. In A Promise Revisted, the two can and can be unlocked by having a save file from Disgaea 3: Absence of Detention, while in Complete+, they are available by default. Both versions involve passing a Senate bill.

Rutile is a character with high ATK and SPD aptitudes, and while she is most specialized to use Fists, she is also proficient with Axes and Guns. Additionally, Rutile can also learn healing spells, proving to be a capable support character as well. Her roster of skills include Kitty Cat Copter, Catly Rave, and Cat God Cometh!.

Rutile's evility is Ring of Friends, which, according to its description, increases her stats by 5% per ally linked by adjacency. This stat increase also applies when she is adjacent to enemy units, however, and increases by an even higher percentage (up to ~50%) when adjacent to certain units. These hidden mechanics apply to her evility in both Disgaea 3 and Disgaea 4.

Rutile's portrait in Disgaea 3 and 4

Rutile's Cut-in image in Disgaea 3 and 4 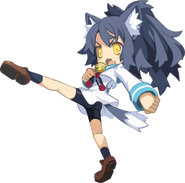