The Rifle Demon is a class in Disgaea 3: Absence of Justice. It originally appeared in Disgaea 2: Cursed Memories, and during the transition between the two games, the Rifle Demon received various alterations in terms of gameplay but not design.

The Rifle Demon is a monstrous creature with large muscular build. The Rifle Demon has small legs, meaning it can't move around very quickly, and also tiny wings that are incapable of flight. It has 3 pupil-less eyes on its face, two horns, and large teeth. There is a strange core in the center of its body. Its most defining feature is its arm-mounted laser cannon that it can use to fire humongous and powerful blasts of plasma energy at its opponents. The reason for its cannon is explained in its Disgaea 2: Dark Hero Days profile, where it says that Rifle Demons attacked a high tech human world and ransacked its technology, combining it with themselves. With their high Attack and Accuracy stats and their ranged normal attack, they can decimate foes even from a distance. Its Evility, Double Lock-On, makes it so that if the Rifle Demon attacks with a Normal Attack and hasn't moved, it will then perform a second attack. It can Magichange into a Gun. 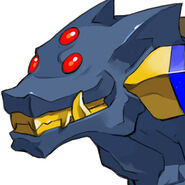 Rifle Demon's Cut-In Image
Add a photo to this gallery

Retrieved from "https://disgaea.fandom.com/wiki/Rifle_Demon_(Disgaea_3)?oldid=35193"
Community content is available under CC-BY-SA unless otherwise noted.