The Prinny Class in Disgaea is the first monster class to be unlocked in Disgaea: Hour of Darkness and its ports. The player's team even comes with three free "Average"-level Pvt. Prinnies to start, as they are part of Etna's Prinny Squad. In battle, they specialize in ATK power, and one of their specials also makes them good Status Ailment inflicters. Despite their weakness, their final tier, the "Prinny God," is immune to Status Ailments. However, their stats, even at "Genius"-level, do not compare to the game's other monster classes.

All Prinnies explode when thrown, and will even set off other Prinnies that they happen to hit when they explode.

The player begins the game able to create tier one Prinnies, but higher tiers of the class can only be unlocked by clearing stages in Prinny Land.

It's worth noting that Prinnies in the original Disgaea and its ports are the only generic class in the entire franchise that has only five tiers instead of the usual six. A sixth tier does exist within the game's code, but it is never fought anywhere in the game, nor can it be obtained by the player through any means.

Handle your prinnies with care, because they explode if you throw them. Prinnies aren't technically demons. They are irresponsible, but they work for the Overlord to pay for their sins, but that is the real joke. They don't do their jobs well, so they'll be stuck in the Netherworld for a very long time. 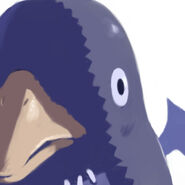 Prinny's Cut-In Image
Add a photo to this gallery
Retrieved from "https://disgaea.fandom.com/wiki/Prinny_(Disgaea)?oldid=45659"
Community content is available under CC-BY-SA unless otherwise noted.