Prinnies are recurring beings in the Disgaea series. They are the reincarnation of sinful humans' souls, and one of Nippon Ichi's most identifiable character races, and are the company's official mascot. Ever since their first appearance, they were considered the series' unofficial mascots.

A Prinny (プリニー Purinī), romanized as "Plini" (from the original term "Plinian Squad") in the The World of Disgaea artbook, resembles a small, usually blue, brown pouch-wearing penguin with disproportionately small bat wings and two brown peg legs where feet would normally be. Their taped on stomach section is white, and they have yellow pointy beaks. Their eyes are black circle with a white ring around them.

They come in various colors throughout the series, though the above mentioned color scheme is their most common coloring, and is the default color scheme for Prinny characters in the Disgaea series.

When thrown, a Prinny explodes on impact. A common trait of the Prinnies is their upbeat attitude, lazy and unintelligent personalities, their signature pirouette spin, and frequent use of the word "dood" (as an interjection - they constantly end their sentences with "-ssu", a diminutive slang form of "desu" used by 'punk teenagers' in the Japanese dialogue). According to Valvatorez, the inclusion of "dood" is mandatory Prinny behaviour and Prinnies who fail to include it in their lines face severe punishment.

Prinnies use machetes as their primary weapons, and occasionally bombs in team attacks. They can also summon a gigantic energy beam known as the "Pringer Beam". They keep their arsenal of weapons and various other items in their pouches.

While rarely mentioned in-game, Prinnies have been known to dispense a beverage known as "Prinny Juice". While few know what this fluid actually contains, most summarise that it is literal "Prinny Juice", given Etna's cruel nature.

According to the game Disgaea: Hour of Darkness, when a human (or half-human in Laharl's case) who has led a worthless life (e.g. a thief or murderer) dies, the soul is sewn into the body of a Prinny. After being reborn, the newly created Prinny will serve as a soldier, slave, or servant in the Netherworld or Celestia until it has earned reincarnation, and leave its servitude in a ritual involving the Red Moon. In Makai Kingdom, however, Prinny bodies are said to be manufactured in Ruskan (inventor demons) factories, with the assembly line never seen. According to Prinny Research Squad, a Prinny body that has multiple souls in its skin will become fat and flabby.

In Disgaea 4, it is revealed that, on rare occasions, a soul's reincarnation into a Prinny can go halfway, primarily due to the Netherworld not being able to afford enough Prinny bodies. An example is main character Fuka, who instead has to wear a Prinny themed hat and jacket over her school uniform.

Some Prinnies live in a place called "Prinny Land." It is their own world in which Prinnies do not explode when thrown. Some Prinnies flee there to escape their lives in the Netherworld, and some may have rebelled or have been banished there. Another place Prinnies can be found is the "Land of Carnage." These Prinnies live for battle and look down on newcomers.

In the Disgaea series, the Prinny is a reoccurring monster class first introduced in Disgaea: Hour of Darkness. Prinnies appear in all Disgaea games as a generic class. Each tier is named after a military rank. Prinnies are always one of the first monster classes available. They tend to have decent attack, but lower Intelligence and Defence.

Appearances in the Disgaea series

Prinnies first appear as a team of monsters hired by Etna in the Tutorial Map. After this, additional Prinnies can be recruited as a generic monster class in the Dark Assembly. Interestingly, they are the only class with only five tiers. They are also the only Monsters known to never appear in the Item World as standard enemies.

The Prinny redemption cycle becomes a major plot point in the eighth episode of the game, Reincarnation. Flonne awakens to the sound of Prinnies chanting and escaping the castle. Big Sis Prinny then explains that they are heading to the Red Moon to be reborn. After Laharl pursues them to the Lunar Snowfield, it is also revealed that Laharl's mother became a Prinny after her death. The episode ends with her soul and that of several other Prinnies being taken away by Death to the Red Moon.

Aside from story appearances, Prinnies appear rarely in as enemies. They appear in the Witches' Den and attempt to overcome Laharl and obtain the title of Overlord, as well as in Prinny Land. Baal, a superboss, becomes Prinny Baal after being defeated once. He is, quite appropriately, equipped with the Prinny Costume. In Disgaea DS, a Prinny provides humourous commentary in the New Game+.

In Disgaea 2, the Prinnies lead the "Dark Court" and are responsible for judging the party's crimes, of which a guilty verdict will always be passed. In general the felonies applied by the Dark Court are to the player's benefit, but if one wishes to remove them from a character then the character must reincarnate as a Prinny to "atone for your sins." Prinnies are also available as a generic monster class, this time with a new tier, in this game they have their own music theme called "Prinny My Love".

In Disgaea 3 Prinnies return as a generic class. Their Magichange transforms them into guns. Special Prinnies exist, particularly in the "Prinny Pirate" group, involving Prinny Laharls and Prinny Aurums. Prinny Kurtis, along with his cyborg form as DLC for the game, as well as the 'Hero Prinny', the Red Scarfed hero from the PSP game.

In Disgaea 4, Prinnies return as a generic class but this time can magichange into bows. This installment also delves deeper into the Prinny creation process, showing that Prinnies are made in a factory in Hades and then trained by Prinny Instructors before being shipped out to whoever they end up working for. However, Prinny Hide isn't an unlimited resource and if there isn't enough hide, pieces of clothing such as hats will be created with the hide so they can keep the process going. Without being bound by the special Prinny hide, a sinful soul will simply be lost and unable to ever repent for its sins. It's notable that partial-Prinnies (referred to as "Unprinnies") like this do not explode and retain much of their human selves.

In Disgaea 5, Prinnies return as a generic class. Their Magichange allows them to transform into swords, and Dual Magichange with another Prinny turns into a wide sword.

Also, there exist another kind of Prinny that resides in Toto Bunny. Unlike most Prinnies in other netherworld, they sport a yellow Prinny hide, uses the term 'plip' rather often (they ends their sentence with '-byun' in japanese instead.), and were treated as a family instead of being a servant.

Prinny: Can I Really Be the Hero?

In Prinny: Can I Really Be the Hero?, the main character is a Prinny referred to as Hero Prinny. Etna recruits them and 999 other Prinnies to find the ultimate sweet for her, and gives one Prinny a special scarf to stop them from exploding. The player controls one Prinny at a time, with new Prinnies being given the scarf when the old Prinny is killed.

In Prinny 2: Dawn of the great Pantsu Wars, Etna sends the Hero Prinny and 999 other cohorts to find the person responsible for stealing a pair of her panties. In an alternate story called Asagi Wars: The Vengeance of Asagi, Asagi, who was turned into a Prinny following the Asagi mode from the first Prinny game, is pitted against alternate versions of herself in order to prove herself the true Asagi.

In Disgaea Infinite, the main character is a Prinny who works at Laharl's Castle. After the "failed assassination" of Prince Laharl, his salary gets cut and is forced to work for free. Refusing to accept the change, the pocketwatch TickTock turns Prinny into Ghost Prinny and sends him to the past in order to change his fate.

In the game Phantom Brave, Prinnies are allowed to use all weapons, but have a less story-backed role. However, Pringer X serves as the final challenge of the bonus storyline. Phantom Brave's Prinnies cause explosions upon being summoned or unsummoned - however, these explosions do not injure the Prinny itself.

In Makai Kingdom another Nippon Ichi game, Prinnies make an appearance but have demon souls rather than human. They differ from their Disgaea counterparts in that they do not explode when thrown. Prinnies in this game have a high TEC stat, meaning that Wrenches, Shovels and Bombs are excellent weapons for them as well as making them excellent vehicle drivers. You can also fight a Prinny in a bonus stage who drives the Super Robo Suit.

Prinnies make a cameo appearance as birds that the player can fly with in this game.

Prinnies make a cameo appearance as optional rare monster fights. There are four types of Prinnies in the game, ranging in size from normal Prinny height to taller than a full-grown adult. Prinnies can only be found when entering the mirror portal to the "Another World" while playing as the male main character, Nine. In battle, the Prinnies have a large amount of health, but tend to only use one basic knife attack. Defeating each Prinny type grants the following achievements:

A Prinny, along with Etna, is available as a playable character. He seems to be a reincarnation of a pervert criminal, as seen as he always peeping on the girls when they're bathing, just for being a punching bag by Etna. He also has fears towards Felicia (from DarkStalkers) as she was "playing" hunt with him.

A Prinny, along with Etna and Flonne, is available as a major playable character. The entire Prinny squadron under Etna's command joins the cast early on in Kanata's storyline and are often put to work as servants and gophers for the other characters, with tasks such as cooking food, giving back massages, and organizing weapon collections. The Prinnies working for Etna continually express their desire to work for Flonne instead of Etna, especially after Flonne reveals her merchandising plans to shoot the film "March of the Prinnies", narrated by a famous Netherworld actor. Despite their star-struck cries of "Can I really be the hero, dood?", Etna smashes their dreams by noting that their salary for such a movie probably wouldn't be much more than a dried fish with Flonne's budget. In battle, Prinny is a full-fledged PC, with long combo strings and the highest-hit-chain EX Skill in the game. It's notable that they show up as the main explosive source in Pamela's EX Skill.

Prinnies appear as random enemies and denizens of the Bizzaro Earth. In the hero's base, a Prinny is forced to act as the hero's "Wife", playing its role by continually nagging the main character for funds to expand the inventory and the "Home" installation. If the player goes too long without contributing to the funds, the Home falls into disrepair.

Another Prinny can be found simply spending time in the main Bizzaro Earth base area, talking about his sad position in life as a peon. If you nag him repeatedly, he will give the main character three Costumes to transform him into Laharl, Etna, or Fallen Angel Flonne.

Though not an appearance by the creature itself, Team Fortress 2 does include some items based on the Prinny, two being all-class cosmetic items (the Prinny Hat and Prinny Pouch), and one being an all-class weapon reskin (the Prinny Machete). These items were released as promotional items for Disgaea PC, and were given to those who purchased the game before July 4, 2016, but the items themselves were added in the Meet Your Match Update, which was released three days after the promotion ended. 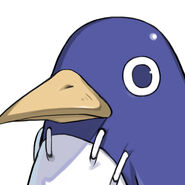 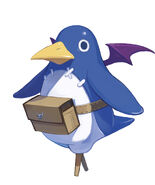 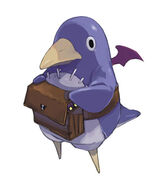 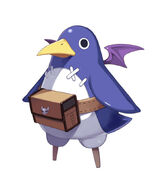 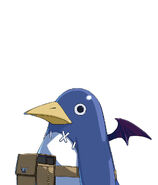 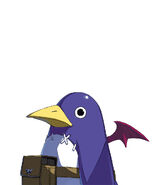 prinnies as they appear in the disgaea 4 manga
Community content is available under CC-BY-SA unless otherwise noted.
Advertisement