Priere, originally known as Prier, is the main character of the Nippon Ichi game La Pucelle: Tactics and has since made a number of appearances in the Disgaea series. In her original game she was a skilled demon hunter, and rather powerful for being human, but appears as an Overlord from an alternate Netherworld in the Disgaea games. Her appearance as an Overlord is a reference both to one of the endings of La Pucelle and the Japanese belief that one who kills 1000 demons will become one.

An updated re-release of La Pucelle, known as La Pucelle: Ragnarok, has a side story not only following Priere after she becomes a Demon Overlord, but also having multiple endings; the bad ending having her chaotically violent as in Disgaea 2; and the good ending having her become "the Maiden of Darkness", an Overlord with her sanity intact.

Noticeably, portrayal of Priere's demeanor seems to change with each game. In Disgaea 2, she was shown as having an immense want for battle, and seemed to have the same attitude in Disgaea 3, though she does show some of her human side, such as wondering how her younger brother is doing. This lead to Ragnarok's multiple endings, with each ending explaining a personality; similar to how the different endings in Disgaea Infinite explained various cameos in other games.

In La Pucelle: Tactics, she's an apprentice Demon Hunter. Priere's heart is in the right place, but she is also impatient, selfish, and has a short temper. Priere usually carries a baton, but more often uses her legs in combat. Despite the fact that she has rather large breasts, her tomboyish nature and aggressive attitude (prior to becoming a demon overlord) causes her to be mistaken for a boy by Homard. She later gains an infatuation with Croix as the story progresses.

Priere and her brother Culotte were taken in by the Church of the Holy Maiden after the deaths of their parents. During their time at the orphanage, they both joined the church choir, where Priere learned to use a baton. When Priere was 12, they befriended Eclair, the princess of Paprika while performing at the royal palace.

Sometime during her childhood, her aptitude for combat was discovered, and at the age of 16, both she and Culotte (12) were inducted in La Pucelle, the Church's Demon-hunting squad.

Her later appearances are a reference to an alternate ending in which she becomes an Overlord after becoming too powerful in the Dark World. When she first defeats a level 500 demon lord, she is awarded with the title, and the ability to convert demon enemies. However, this comes with a false "Demon Lord Priere" ending. If Priere continues to fight her way through the Dark World, she will eventually become an Overlord by defeating a level 700 Overlord, gaining an alternate ending "Overlord Priere".

In the Overlord Priere side story, it is shown that the title of Overlord was placed on her quite unwillingly by a random demon official. She initially rejects the title (though every single one of the other main characters comments that her personality suits that of an Overlord much more than it does a Holy Maiden). After confronting an impostor who used her title to attempt to take over the netherworld, she finally accepts her fate as a Demon Overlord.

In the first Disgaea game, Priere appears as a bonus boss in the final map of the Alternate Netherworld stages. At level 2000, she is one of the strongest bosses in the game, and even Etna had heard of her, saying that nobody who fought her lived to tell about it, though Laharl claims he'll be the first. Defeating her results in Priere joining the party. She attacks with her baton. Interestingly, her aptitudes are the inverse of Marjoly's, another bonus character. Priere is of the Overlord class.

In the remakes' Etna Mode, Etna and her Prinny servant encounter Priere in the same fashion as Laharl. Etna notes her background, calling Priere a "human who became obsessed with the dark arts, her power growing to Overlord-level strength." Etna claims that she has to fight Priere, probably out of a sense of pride or due to her Demon heritage. After the battle, Priere leaves, preventing recruitment. Etna remarks that the fight was "fun".

In Disgaea 2, Priere does not appear as a playable character. Passing a certain bill, however, will result in her appearing in the Dark Sun World.

Priere's appearance to the party is encompassed by a bright pink aura, symbolizing the extent of her power. Following her defeat, she insists that she still has the will to fight, indicating that she was merely reserving her powers in the prior battle. However, she receives a glance from Rozalin that says otherwise, immediately taking her leave.

Befuddled by the sudden exit, Adell wonders curiously about the situation, with a staunch Rozalin explaining that her distinguished nobility must have scared the powerful demon away. Although, Rozalin wonders to herself about Priere's strange response. This instance further indicates the implication of Rozalin being Zenon, as even Priere had managed to sense the magnitude of Zenon's presence within the unsuspecting Rozalin. Upon her exit she leaves Adell and Rozalin the legendary Felicitation item, an accessory that boasts a high attack.

She becomes a playable character in Disgaea 2: Dark Hero Days, the PSP remake of the second game. she is also a member of the Pringer X project using a magic chant to breathe live into the robot. In addition, the "evil Priere in Dark Sun World" bill is no longer present.

In Disgaea 3, Priere is a DLC character, and can Magichange into a baton (treated as an Axe weapon).

Her native evility, Bound Attack, increases her damage by the number of empty squares in an attack. This is best used with Requiem Aeternam, which has 8 squares in its attack range.

All of her attacks now ATK based, including Requiem Aeternam, which was an INT based skill in the previous games.

Raspberyl has heard of her, and this encourages Mao to battle her. After her defeat, Mao recruits her, saying that "Her dark powers will grow under his tutelage.", though Almaz says that made him sound like a shady religious leader.

In Disgaea 4, Priere is once again a DLC character. She is invited by Fenrich to become a party candidate. He explains to the party that she was once a Demon Hunter in an Alternate Netherworld, and that her power as an Overlord would be a great addition to their party. However, Priere claims she doesn't need allies and attacks them. After winning the ensuing fight, Priere still doesn't have a scratch on her and she deems the party 'weak'. Before she can attack them again, Emizel mentions that he wishes Valvatorez still had the power of a Tyrant. Intrigued by the story, Priere decides to join the party to 'wait' for Valvatorez to regain his power so she can fight him.

Interestingly enough, Priere's human form was in the top 30 for the DLC poll NIS did for Disgaea 4. While her human form is not available, an alternate voice/personality option (usually only used by generic units) is available for Overlord Priere. Her personality types are Tyrannical, Spontaneous and Exorcist. The DLC was released on December 5, 2011 along with Mao and the Deathsaber class.

Priere once again appears as a DLC character in Disgaea D2. However, unlike previous appearances, players are able to acquire Priere in both her overlord form and her original human form. In addition, her demon form allowed one to choose either "good" or "evil" attack voices. (related to her different endings in Ragnarok.)

Priere returns in Disgaea 5: Alliance of Vengeance as a DLC character, only as an overlord this time. She is seen in a DLC story Crazy Overlord. Her monster mounted skill, Light and Darkness becomes a combination skill with Christo. In the mini-episode, Killia  hears rumors of a powerful overlord that was rampaging and arrives to stop its madness. When Killia finds her, she is in the midst of attacking Demons at random in order to get a proper fight. Though Priere is as battle-hungry here as she is in Disgaea 2, she is not necessarily evil and still retains her sanity. Killia and Priere battle across three different areas, with the third one being the finale. If the difficulty is changed to twenty stars via the Cheat Shop, Priere's stats are pushed up to 99999999, as well as the levels of all of her skills. This elevates her to one of the most difficult battles in the game at this level, with only Dark of the Carnage Dimension and Tyrant Overlord Baal sharing this stat cap in ordinary levels. Upon defeating her for a third time in a row, Priere admits that Killia is stronger than she believed and joins him so that they can have endless battles.

In Prinny 2, she appears as a boss at the the end of the bonus stage "Martial Temple" which is unlocked by obtaining 36 Lucky Dolls.

Hero Prinny along with 2 other Prinnys encounter Priere in the Martial Temple. She states that the Netherworld is boring and that she is going to smash it into "smithereens". One of the Prinnies states that they can't lose because they have numbers on their side only to be hit by a ball of energy hit by Overlord Priere's baton like a baseball. This starts the battle. When Hero Prinny defeats Priere she is upset that she was beaten by mere penguins. One of the Prinnies corrects her stating that they're not penguins, but Prinnies. Priere then questions why she lost blaming her weight for losing. Hero Prinny states that the Prinnies love big chicks because they have something to grab unto like pork loins while "flatties" are like kelp, "you use them once then throw them away". This angers Priere who then smashes the floor causing the Prinnies fall back and sweat in fear. Her little brother Culotte calls for his "Big Sis" saying that he needs her help. She ask herself "was that Culotte" and tells the Prinnies she needs to go. She quickly jumps into a portal leaving the Prinnies behind. After she leaves Etna arrives and ask Hero Prinny to repeat what he said about flat girls. Hero Prinny tries to come up with a response, but is so scared that he can not. Etna then screams "I'm going to kill you all!". This sends the 2 Prinnies running for their lives and Hero Prinny sweating.

Overlord Priere as she appears in La Pucelle: Ragnarok
Add a photo to this gallery 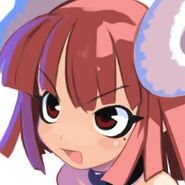 Priere's portrait in Disgaea.
Add a photo to this gallery 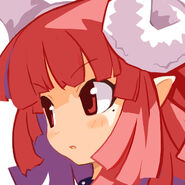 Priere's portrait in Disgaea 2.
Add a photo to this gallery

Priere's portrait in Disgaea 3.
Add a photo to this gallery 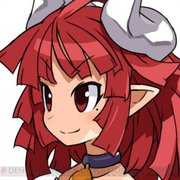 Priere's portrait in Disgaea 4.
Add a photo to this gallery

Priere's portrait in Prinny 2.
Add a photo to this gallery

Priere's Cut-in image in Disgaea 4.
Add a photo to this gallery

Human Priere's Cut-in image in Disgaea D2.
Add a photo to this gallery 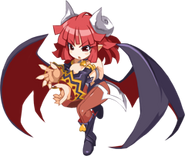 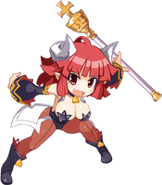 Priere's battle sprite in Disgaea D2.
Add a photo to this gallery

Human Priere's battle sprite in Disgaea D2.
Add a photo to this gallery

Priere is French for "prayer". In La Pucelle, her name was romanised as "Prier" ("to pray").

Retrieved from "https://disgaea.fandom.com/wiki/Priere?oldid=47747"
Community content is available under CC-BY-SA unless otherwise noted.