Pram is a character from Makai Kingdom. An Oracle and Overlord, she was the one who tricked Zetta into destroying his own Netherworld. She is incredibly arrogant, constantly saying she knows everything. She managed to claim the title of Overlord from her father when she was only a couple years old and has a high amount of Mana Power. She is also rather manipulative and will even feign kindness and play on the egos of others (such as Zetta, Laharl and Mao) to trick them into becoming her "playthings" to entertain her. She does appear to care for Zetta in the "good" storyline for Makai Kingdom, though it is likely that she had an ulterior motive. Pram's role is similar to a spell caster with a strong aptitude for staves.

Pram has the Unique Evility known as Punishing Prophecy, which deals damage to an enemy unit at the end of a turn. Because of this, Pram is considered a "Magic Sniper". Because her defense is so low, it is best to keep her away from the front lines and with this evility, have her pick off enemies one by one, like a sniper. She specializes in Ice and Star magic.

Pram is mentioned in Disgaea 2 on the news show hosted by Usagi and Pleinair and appears in the animation for the Omega Ice spell.

In the PSP and PC/ Steam port Pram is a DLC character. Upon being summoned by Hanako she'll boast about her strength as an Overlord and Oracle and fight the party. If defeated she'll complain and ask about the summoning ingredients. She'll blame the loss on Hanako's use of King Drake III as an ingredient claiming it made her weak, and join the party. Like in her other appearances she's best with staffs and her specials are ice element.

Like Zetta, she is available as DLC in Disgaea 3. She heads to Evil Academy to find her "Precious Little Plaything". Zetta reveals however that he knew that Pram had rewritten the Sacred Tome, and challenges her to a battle. After being defeated by Zetta, she is hired by Mao to become a teacher. Mao secretly has plans to experiment on Pram: however, Pram has her own plans for Mao and the group. All of her attacks are Ice-based and she can learn all forms of Ice Magic. She is skilled with staffs and bows.

In Disgaea 4: A Promise Unforgotten, Pram appears again as a DLC Character. When the Hades Party interviews her, she states that she is an Oracle and can predict the Future. Fuka, Desco, and Artina have their futures predicted by Pram but they turn out to be opposite of what they expected. Fuka is enraged by her fortune and decides to battle Pram along with the rest of the party. After they defeat her, Fuka considers Pram's fortune telling to be invalid. Valvatorez intervenes and tells Fuka, Desco, and Artina why Pram's fortune telling was correct. Fuka cannot believe that Pram was correct in her future prediction. The party decides to hire her due to her status as an Overlord, and Pram remarks how she has found her new "toys". In her Pirate Ship DLC, Pram also builds a tank, which destroys Laharl's robot in it's opening sequence. Upon arriving, she allows the party to have the tank as a gift, but silently remarks on the irony of how her "toys" are now playing with her toys.

In Disgaea D2, Pram makes another appearance as a DLC character along with Zetta and Alexander. In her DLC, she fights Laharl and the others to see if Laharl was a powerful Overlord. After defeating her, she states that her reason for fighting them was because she had a prediction that Laharl will become the Overlord of Overlords. Believing this, Laharl makes her a vassal and she becomes playable (though quickly afterwards, she reveals in her thoughts that her prediction of Laharl becoming the strongest Overlord was a "BS story" and really did all this to make Laharl "a new toy to play with").

Pram returns in Disgaea 5: Alliance of Vengeance as a DLC character. She is seen in a DLC Story along with Zetta and Petta.

She retains most of her skills from Disgaea D2, except for her first skill which is now Freezing Prophecy. She has an overload skill Wishdom of Ipos, which cause all enemies' attack to always miss for the next two turn.

She can execute the combination attack with Zetta called Glass Illusion.

Pram appears as the boss for the DLC level "Super Netherworld" which is hinted to take place within Pram's Netherworld. When the Hero Prinny first approaches she is astonished that a Prinny could have possibly survived and reached where "only beings of super-duper Overlord class or higher are allowed", with this she decides that the Hero Prinny will be fun to play with and forces him into a fight with a "super rare item" as his reward should he win (much to the Hero Prinny's dismay).

Upon her defeat she is somewhat astonished and annoyed that a Prinny could defeat her but true to her word she grudgingly hands over the super rare item, the Almighty Boss Battle Fierce Rocket (A.B.B. Fierce Rocket) facility which allows players to skip levels and go straight to the boss battles with a few draw backs (with the Hero Prinny questioning whether this is even allowed in the game). After the Hero Prinny leaves she monologues about how she is happy to be rid of "that oversized piece of garbage" rocket as "They are so particular about what you can and can't recycle nowadays."

Pram as she appears in the Omega Ice spell from Disgaea 2: Cursed Memories. 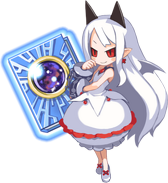 Pram's Netherworld shown in Makai Kingdom
Add a photo to this gallery
Retrieved from "https://disgaea.fandom.com/wiki/Pram?oldid=47764"
Community content is available under CC-BY-SA unless otherwise noted.