Porkmeister is a character from Disgaea: Hour of Darkness and Disgaea D2: A Brighter Darkness. He is the son of Hoggmeiser.

Porkmeister appears at the end of Chapter 3, standing in Laharl's way before he could kill his father. He was upset at his father's greedy ways, and just wanted him to be his father again.

It was this kindness that spared their lives, and made Hoggmeiser join the party.

Porkmeister appears as a recruitable character. He calls out to Laharl, hoping that the Overlord would be able to train him to become stronger and eventually become an Overlord. Initially, the party is unable to recognize him having now grown up into the splitting image of his father, though his childish voice still remains. Though Laharl refuses to train Porkmeister, he allows the young demon to become a vassal at the cost of giving up trying to be the Overlord.

Later, he is kidnapped by Artina to open up discussions with Hoggmeiser concerning future funds that he owed to Celestia as the Hoggmeiser of the future reasoned that he would be more willing to pay if she had kidnapped Porkmeister. However, the plan was stopped by Laharl. 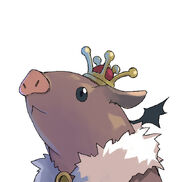 Porkmeister's Cut-in image in Disgaea D2.
Add a photo to this gallery

This article is a stub. Please help the Disgaea Wiki by expanding it, so it won't stay a little shrimp like Laharl.
Retrieved from "https://disgaea.fandom.com/wiki/Porkmeister?oldid=48194"
Community content is available under CC-BY-SA unless otherwise noted.