Plume is the energetic and beloved princess of the Schwert Kingdom. She displays amazing prowess in battle, being said to have power that rivals over a thousand soldiers. Taking on the role of a Battle Princess, Plume uses her sword to vanquish the countless monsters that exist within the continent of Weltecs in Battle Princess of Arcadias.

One day, a large monster descended upon the Kingdom of Schwert, annihilating many of its citizens and the people that Plume held dear. This event changed Plume significantly, driving her to become a Battle Princess in order to exterminate the monsters within the entirety of Weltecs.

In Disgaea D2: A Brighter Darkness, Plume appears as a DLC character. 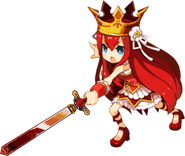 This article is a stub. Please help the Disgaea Wiki by expanding it, so it won't stay a little shrimp like Laharl.
Retrieved from "https://disgaea.fandom.com/wiki/Plume?oldid=47800"
Community content is available under CC-BY-SA unless otherwise noted.