Pleinair Allaprima (プレネール・アラプリマ Purenēru Arapurima) is a recurring character in the Disgaea series. She was designed by Takehito Harada, the man responsible for designing characters in Disgaea and other Nippon Ichi games, and is considered to be his mascot.

Her name is derived from the French words "plein air" which means "outdoors". Her full name means "drawing freely in the huge outdoors".

In the first Disgaea game, Pleinair is the NPC in charge of the Dark Assembly. She was made available as a secret playable character in the Disgaea DS and Disgaea PC re-releases of Afternoon of Darkness. In DS, she can be recruited by selecting the blank option in the Dark Assembly during a New Cycle, while in PC she joins automatically at the beginning of a new game.

She has the class called Mascot. Her unique skill is Usagi Drop, which drops a few copies of Usagi on an opponent. She has high aptitudes for SPD (being the only class other than the Ninja to be able to dodge special attacks and spells) and Hit, making her suited for using guns. The playable Pleinair does not use her original sprite and design from Hour of Darkness, but instead her sprite from Disgaea 2 onward.

In Disgaea 2, she is an anchor on the news program with Axel and Usagi. Pleinair and Usagi appear at the end of every chapter to have a special news report, going over the events that just transpired or talking about an event coming up. During the news report for chapter 6 they start up as usual when Tink interrupts the show with a Pop Quiz Show asking about Yukimaru. When Rozalin beats up Tink and drags him away, control is then returned to Usagi and Pleinair. However, Usagi is missing a chunk out of his left ear. No one is really sure what happened to that part of his ear but most fans think that Pleinair ate it (her cut-in image from Disgaea 4 references this as it shows part of Usagi's ear with a chunk missing). In chapter Seven onwards, Axel takes Usagi's place on the news show. While Axel is part of the news cast, Pleinair has a look of discomfort on her face, as if being near Axel upsets her. During the end of chapter 12, due to Axel rushing back to Veldime to stage his "Real Comeback", Pleinair is all alone in hosting the news, meaning that her entire show is nothing but silence. During the end of the game, Usagi comes back to the news show to sit alongside Pleinair.

She is downloadable in Disgaea 2: Dark Hero Days for free. Players have to go the Playstation store for the download. While doing her DLC Quest, Hanako, while trying to summon powerful opponents for Adell to fight during his training, accidentally summons her to Veldime. Adell and Rozalin are a little shocked to see that Hanako ended up summoning her. Nevertheless, Adell goes over to her to fight her in his usual fashion. However, as he goes over to her, he starts to become hesitant until eventually stopping completely and ends up asking for her autograph. When Rozalin begins to question what he's doing, Adell has some sort of breakdown, admits he is a huge fan and runs off. They then find Adell 2 hours later hiding in his bed sometime later. Pleinair joins the group out of pity, making her one of the only two characters you don't have to fight to recruit, along with Miabel.

In Disgaea 3, she is the Class Representative NPC. Speaking to her grants access to the Classroom Assembly. By doing the mode "Survival" at the Ranking shop and acquiring 7 level spheres, and then entering the mystery gate that appears on the next floor, you can choose a "Wish" to be granted from a Dragon. One of the wishes is "Mascot Girl" and by selecting it, Pleinair appears in the Recruiting Section of the level selection screen. In the cutscene, she appears in a classroom (once again speaking only in ellipses) to which Mao, Almaz, Raspberyl and Sapphire enter and assume that she is there applying for a teacher position. They then battle to see if she has what it takes. During the battle, she wields a one-of-a-kind Usagi Wand which can only be obtained by stealing it from her. Beating her unlocks her as a character. In the scene afterwards, Mao decides that she is in no position to be a teacher, especially if she won't talk. However Almaz warns him that doing so may anger a lot of fans (due to Pleinair's mysteriously huge fan base), of course Mao says he doesn't give into peer-pressure and tells Pleinair up front that she won't be hired. However, one look from Pleinair somehow instills complete terror into Mao causing him to reword his sentence making it so she won't be hired as a teacher but he will surely find another position for her. In response to this, Pleinair replies with a simple "hahaha...". Like in Disgaea DS, she has high Speed and Hit aptitudes and is best suited to using Guns.

Pleinair appears like she has previously, as the NPC in charge of the Cam-pain/Senate (though unlike previous games, Usagi talks in her place in this role). However, she can be unlocked as a playable character by getting 5000 CP or getting 10 consecutive wins in the downloadable Pirate Tournament Survival Mode. In Disgaea 4: A Promise Revisited, she is included from the start.

In Disgaea 5, Pleinair is in charge of the Senate. She is also a DLC character in the original version, who is only obtainable to those who purchase the season pass for the game's DLC.

In Disgaea 5 Complete, she is part of the base game, but must be unlocked by passing three bills in the Dark Assembly first.

Pleinair could be seen in the bad ending with Usagi reporting the end of the prinny squad. The credits then roll. A miniature Pleinair could also sometimes be seen sitting on the TV in the Etnachamber. 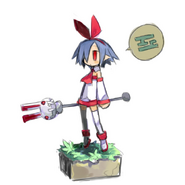 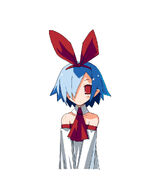 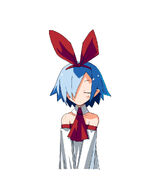 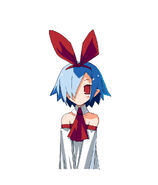 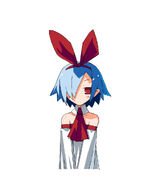 Pleinair's Cut-in in Disgaea DS.
Add a photo to this gallery

Pleinair's Cut-in in Disgaea 3.
Add a photo to this gallery

Pleinair's Cut-in in Disgaea 4.
Add a photo to this gallery

Pleinair's Cut-in in Disgaea D2.
Add a photo to this gallery

Pleinair's sprite in the PS2 version of Disgaea: Hour of Darkness.
Add a photo to this gallery
Retrieved from "https://disgaea.fandom.com/wiki/Pleinair?oldid=46481"
Community content is available under CC-BY-SA unless otherwise noted.