Petta is a character introduced in the PSP re-release of Makai Kingdom where she stars in her own story scenario. She is Zetta and Salome's daughter.

Her core evility is "All Range +" which gives adjacent allies 2 more panels in attack and magic. Her most notable secondary evility is "Badass Daughter" which increases the stats of all adjacent Overlords by 30%. Like Pleinair there is a requirement to have her show up in the Dimension Guide menu. You must first complete "Command Attack" from Pirate Trial in the Pirate Editor.

Her core evility remains the same from Disgaea 4: A Promise Unforgotten, being "All Range +" which gives adjacent allies 2 more panels in attack and magic. She also retains her three specials from Disgaea 4: A Promise Unforgotten (Azure Prison, Petta Beam and Time Drive) but her Time Drive special's Power Level has been weakened from S to A. She can be recruited after passing a bill at the Dark Assembly and defeating her in her stage. She joins at level 250.

Petta returns in Disgaea 5 as a DLC character. She possesses the Overload skill "Future Eyre", which allows any allies that have used their Overload skills once during the battle to use them again. Other than this, her skills and Evilities remain similar to what they were in past entries.

Petta appears in Disgaea 4 as a DLC character. She is quite polite and well mannered, but exudes a large amount of energy as she enters the room. Petta explains that she is from the future and wishes to join the group to prove to her father that she is worthy to fight beside him by mastering the "Petta Beam."

Once the battle with her is over, she reveals to the crew that her father is Zetta, her title is "Badass Daughter" after all. The conversation leads to Zetta appearing and pleasantries are exchanged between the two. In the end the decision is up to Zetta and not Valvatorez. His conditions showed how much he spoils her as a father, two hour afternoon naps being one of them. This makes Fuka call him the biggest tsundere of them all.

Petta appears as a postgame character in Disgaea D2. After recruiting her, players will unlock the trophy, There's Something About Petta.

Cornering the suspicious eye beam girl, Laharl demands her identity and purpose. The young girl reveals herself to be Petta and that she came to the Netherworld to look for an Overlord who resembles a particular book. Etna, Flonne and Sicily comment on how Laharl resembles the book because he in particular wears red, has antennae and a short-temper. Petta scoffs at the notion, stating that the Overlord is not a child and that she's looking for the most Badass Freakin' Overlord. Laharl believes himself to be that kind of Overlord, with a confused Petta engaging him in battle.

Following Petta's defeat, Laharl convinces himself that he is the most Badass Freakin' Overlord, ordering Petta to modify the book to make it look more like him. Petta tells him it was just a misunderstanding and that she's looking for Overlord Zetta. Etna is shocked at her proclamation, citing Zetta as the strongest Overlord in all the cosmos and the party wonder why Petta is seeking him out, with the latter stating she is his daughter. The party is flabbergasted by her revelation, with Sicily revealing how glad she is that she's not the only daughter of an Overlord. Shocked at Sicily's comment, Petta wonders how an angel could be the daughter of an Overlord, with Flonne stating that she and the party will help Petta with her search for Zetta. Laharl decides to make Petta his vassal, telling her that she would not have to look for him because they will eventually meet up with Zetta in the future. Petta resists but is forced into the party anyways, agreeing with Etna that she is probably never going to see her father.

In a DLC to recruit Zetta, Zetta will appear frantically looking for her like any good father would (though he tries to deny this to Laharl and the others). After he is defeated, Petta will appear and happily reunite with Zetta (much to his embarrassment), and convinces him to be one of Laharl's vassals, effectively forcing him to join the party.

Petta appears as a DLC character in a scenario pack along with her father Zetta and the Oracle Pram.

Petta appears as an obtainable character. 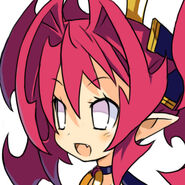