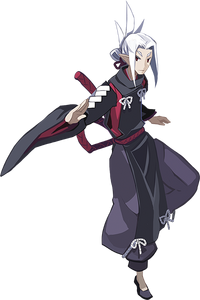 The Onmyo Monk is a recurring class in the Disgaea series, first introduced in Disgaea 4: A Promise Unforgotten.

The Onmyo Monks use a unique type of magic called Onmyo Magic, which uses various incantations and Feng Shui, and are said to come from an Eastern Netherworld. Many try to study Onmyo Magic under the Monks, but the secrets of the magic are revealed to only a trustworthy few from their homeland. Using both their Onmyo Magic and curses, they can control the land and their spells have a wider range of properties than ordinary magic. Despite their differences, they often trade information with the fellow curse using Sorcerers. Opinions on the Onmyo Monks are mixed, with some demons taking interest in their unique powers and even inviting them to serve under their Overlords, while others don't appreciate them due to lacking pure power.

The Onmyo Monk is unlocked by having both a level 30 Sorcerer and Ninja at the same time.

The Onmyo Monk is unlocked by having both a level 10 Skull/Mage and a Priest/Healer.

Retrieved from "https://disgaea.fandom.com/wiki/Onmyo_Monk?oldid=46721"
Community content is available under CC-BY-SA unless otherwise noted.