Nosferatu, also referred to as Vampire, is a monster class in Disgaea: Hour of Darkness. Nosferatu appear as stereotypical vampires donning capes and black clothing. The vampire Maderas also speaks with an accent similar to Dracula.

The player's first encounter with a Nosferatu will be when they battle Maderas during Episode 5 and he joins the party after being defeated. However, he is not a "true" Nosferatu, having the unique "Demon Sire" class instead, and defeating him will not unlock the Nosferatu class.

Nosferatu use a split of Magical and Physical Specials. 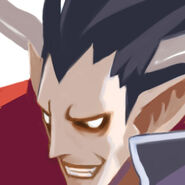 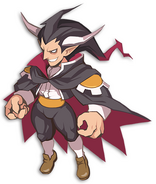 The Vampires in Makai Kingdom on the other hand are very different from the Disgaea Nosferatu. They appear much darker and far more sinister in appearance, looking more monster than humanoid. They also have gigantic fangs for teeth. They appear to wear trench coats with eyes on them and have had their wrists staked. Because even monsters can use weapons in Makai Kingdom, Vampires are proficient in Katanas, Syringes, Books and Rapiers.

Retrieved from "https://disgaea.fandom.com/wiki/Nosferatu?oldid=48052"
Community content is available under CC-BY-SA unless otherwise noted.