Nisa is a character from the Hyperdimension Neptunia series, where she is one of the two downloadable playable characters in the original release. She is a self-proclaimed "hero of justice" filled with passion and bravery. Nisa takes great offense to comments about her chest.

Due to the strife between Nippon Ichi Software and Compile Heart, both cut ties to each other - including NIS America - which resulted to Nisa being seperated from her series origin.

Nisa has medium-length dark blue hair and eyes, accompanied by a pair of black goggles with yellow-orange lenses. She wears a black shorts-jumpsuit that is zipped all the way down along with a red scarf tied around her neck and a prinny backpack. She wears gray gloves with white cuffs and black buttons along with matching shoes.

Nisa has a generally upbeat and optimistic persona. She is kind and selfless; always putting the safety of others, and most importantly any world that she lives in, before anything else. She believes that good will always triumph over evil and has an extremely strong sense of justice. Nisa is also very insecure about her ironing board of a chest which can cause her to become very violent and less righteous when made fun of about it to the point that she lets go of her morals just to attack anyone that mentions or makes fun of her flat chest.

Nisa is presented in her appearances as a versatile, yet powerful character with above-average stat aptitudes in HP, ATK, HIT, and SPD. These aptitudes compliment her high proficiency with Fists, Swords, Guns and, to a lesser degree, Axes. Her recurring evility is Nippon Ichi, which raises her stats by 1% for every ten hours of game time on the player's save file for the respective game. Depending on the game, her unique special skills include Zettai Hero Legend, Dark X Slash, Justice Knife, V Extreme, and N I S A.

Nisa is a DLC character for Disgaea 4: A Promise Unforgotten. In her demo, she introduces herself and jumps into the room, proclaiming herself as the Heroine of Justice who has come to save Vulcanus and Fuka from the demons. Both Vulcanus and Fuka are initially confused until Emizel remarks about her flat chest. This causes Desco and Fuka to also take notice of this as well. Nisa then becomes angry, and challenges the party without waiting for Valvatorez's explanation.

After being promptly defeated, she proclaims that she will battle them again, but Valvatorez finally calms her down by telling her why Vulcanus and Fuka are with them. Quickly understanding, she explains herself that she was invited to the Netherworld as a Heroine of Justice. Valvatorez takes a liking to her and invites her to the party. Fenrich then surprises the group by happily accepting her and stating that he was the one who sent the invitation. Nisa then decides to help the demons protect the peace of the Netherworld, no matter how ironic it sounds.

In Disgaea D2: A Brighter Darkness, Nisa appears as a DLC character.  In this game, her Evilty increases her stats by 5% per "flat" unit in the party.  This includes characters still in the base panel.

In her scenario, she is one of the contestant of an event, with her rival being Etna. After their introductions, Etna asks Laharl and his group to help her defeat Nisa, despite the boy's annoyance.

After the battle, Nisa declares that she wouldn't give up but was taunted by Etna, who taught that she won the "Cutest Girl in the Netherworld Contest". Nisa disputes her claim by saying that the contest is actually "Ultimate Heroine of Justice Contest", which is why she is determined to win. The group was confused until Sicily asks the host about the contest, in which the host replied by saying that it is the "Flat Chest Contest", which shocked and angered the two girls, leading to them to punch away the host unclaiming their flatness.

In Disgaea 5: Alliance of Vengeance, Nisa appears as a DLC character. The Evilty she starts out with in this game is "Nippon Ichi", which makes her stats 1% stronger for every ten hours of game time on the player's save file. Her other Evilities are "Dangerous Revival", which increases her stats by the % of HP healed, and "Belated Hero", an Evility that increases her stats if she becomes the last unit of a force. She also has different skills in this game. Her skills are "Justice Knife" as her starting skill, "V Extreme" as her next one, and then "N I S A" as the last one. She has an "S" aptitude in guns and swords and has a movement of 7.

Nisa's artwork from Hyperdimension Neptunia.
Add a photo to this gallery 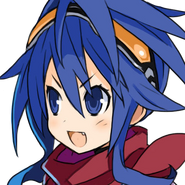 Nisa's portrait in Disgaea 5
Add a photo to this gallery

Nisa's sprite in Disgaea 4, D2, and 5
Add a photo to this gallery

This article is a stub. Please help the Disgaea Wiki by expanding it, so it won't stay a little shrimp like Laharl.
Retrieved from "https://disgaea.fandom.com/wiki/Nisa?oldid=49010"
Community content is available under CC-BY-SA unless otherwise noted.