Ninja is one of the humanoid classes in Disgaea 2: Cursed Memories.

They are unlocked by passing the "Make a Ninja" bill in the Dark Assembly which requires having a character reach Level 5 Fist and Sword Mastery (it does not have to be the same character with both masteries).

Their dodge rate dramatically increases when in danger, and the Lover specialists increase this by +1% per two levels.

Ninjas are also unique in that they are the only non-magic Humanoid class besides Kunoichis and Thieves to learn unique skills. These include the "Utsusemi" technique, which attacks a foe from behind, and the Konoha Gakure, the traditional "ninja vanish" from other forms of media.

Ninja are masters of evasion, putting their evasive capabilities right up there with an Armor Knight's defensive abilities. Giving them Fists is a commonplace tactic for some, since Fists increase their SPD even more, strengthening their evasiveness even more. However, as a fighting force, they are mediocre. Their SPD is their dominant statistic. If they are Fighting, they should be given physical weapons such as Swords, since they are not as openly customizable as their Female counterparts are. However, despite their uncanny SPD and dodge rate, They are useless against Rifle Demons, since those enemies can never miss an attack.

Their main career is being an assassin and they'll do what they are ordered to do without much recourse. They have a strict code of honor and are known for their loyalty. 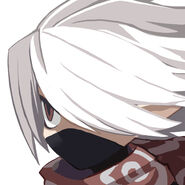 Ninja - Disgaea 2
Add a photo to this gallery
Retrieved from "https://disgaea.fandom.com/wiki/Ninja_(Disgaea_2)?oldid=44615"
Community content is available under CC-BY-SA unless otherwise noted.