The Ninja is a male-only class in Disgaea: Hour of Darkness that is known for having excellent skills in the use of the fist (All tiers have an 'S' for Weapon Mastery), but also a high rank of A for axes. Ninjas have a high counter rate as well, but are perhaps best known and most appreciated for their very high Speed, allowing them to evade even magical attacks.

Players of the PSP and DS versions of the game should be wary if Ally Effects are turned off when casting Healing spells on a Ninja, as this sometimes causes the spell to be calculated into the Ninja's dodge algorithm, rendering the spell useless. (Game records this as a 'Miss')

The ninja are apostles born from the darkness of the Netherworld. Originally assassins, their clan is the most feared by those in power. Under Krichevskoy's rule, they mended their evil ways, and today they are trusted as loyal bodyguards. ...Zam (...De Gozaeru). 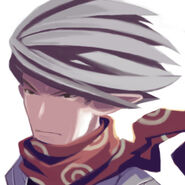 Ninja's Cut-In Image
Add a photo to this gallery
Retrieved from "https://disgaea.fandom.com/wiki/Ninja_(Disgaea)?oldid=41135"
Community content is available under CC-BY-SA unless otherwise noted.