Vic Mignogna
Judge Nemo is the main antagonist of Disgaea 4: A Promise Unforgotten. He is a man that hates demons and angels, but has a deeper hatred toward humans, whom he considers nothing but garbage, saying their very existence is a sin. When questioned by Fenrich that if he considers humans to be garbage that he would be considering himself garbage as well, Nemo says he isn't human anymore. Nemo's goal is to destroy both the Netherworld and the Human World.

Valvatorez's group first encounters Nemo after they defeated Hugo, who reveals that he is the secret ruler of the Human World and the one who was controlling the Netherworld. Although Nemo offers Valvatorez to join forces saying they have the same goal of bringing Hades to the world, they quickly become enemies when Valvatorez states his way of bringing Hades is to re-educated the Netherworld and the Human World back to the way they were supposed to be while Nemo's way is to destroy them. Nemo then flees to the Human World, telling the heroes to come after him.

When the group arrives, Nemo sends forces of Battle Suits and demon clones to attack them, all of which where created by Fuka's father. During this time, the group learns that Nemo has lost faith in God and can't see or hear angels anymore since he never responded to whatever Vulcanus said. At the end Nemo orders Fuka's father to send out DES X against the group, but she is defeated twice. Enraged, he orders her to fight them again only to hear DES X refuse and say she'll only listen to Fuka's father. After Nemo hears Valvatorez declare to him that his plans have been foiled, he reveals his plan B, which is destroying the moon. This surprises the group and sends Fenrich into a state of panic since not only is the moon a source of his power as a werewolf, but it is also a symbol of the vow he made to Valvatorez.

To help with the destruction of the moon so he can destroy the Earth, Nemo enlists the help of aliens. However, alien members are quickly defeated as Valvatorez's party makes there way to the core of the machine destroying the moon. After they destroy it, Nemo reveals that the moon is now on a crash course towards Earth with no way of stopping it. Just when it seems like Nemo is about to succeed, Archangel Flonne appears and uses her newly built Great Flonnzor X to hold the moon from crashing. Nemo can't see either Flonne or Flonnzor X and think what is happening is Valvatorez's doing. He also reacts with anger when he hears the group mention Artina's name. After Great Flonnzor X puts the moon back in place with the help of the awe energy from the Earth, the Netherworld, and from the main characters, Nemo become even more angered and suddenly disappears as a ominous dark energy surrounds the Earth and Moon. Flonne reveals that Fear the Great has been activated, a machine made by God to destroy mankind if the humans' malice proves to be too great. It powers up through human malice and it grows in power from the soul of the human with the most malice, which is Nemo.

When the group enters inside Fear the Great to shut it down, they discover embodiments of Malice that were created by Nemo. It is also revealed that Nemo knew Artina back when she was alive. 400 years ago, he was a solider who was intelligent and became Lieutenant Commander at a young age. His country was at war with Artina's country long before either of them were born. During sometime in the war, Nemo was captured by soldiers from Artina's side. After he escaped, he was betrayed by his own country under the suspicion of being a spy and his family was murdered. Sometime later, Nemo wandered into Artina's treatment center, where she help tend to him. This however, caused her own country to believe she was a spy and killed her. Angered at humanity by the death of his family and Artina and angered at demons and angels for doing nothing, Nemo began devising a plan to destroy the worlds. Even after his body crumbled away, his soul lived on and evaded death as he continued to prepare for his revenge. Artina, reborn as an angel, watched over Nemo, but since he lost his faith in God, he couldn't hear or see her. The group confronts Nemo's Malice and tries to convince him to have faith again since Artina has become an angel, but he angerly shouts at them for saying her name, saying that only he can say her holy name. After several attempts, the party finally gets Nemo to have faith again and see Artina. Seeing what he is doing is wrong, Nemo decides to disappear to limbo, a place where souls can never reincarnate, along with Fear the Great. Upon reaching the core, Nemo tells the group to leave before they disappear as well, but Artina tells him he is only taking the coward's way out. When Nemo asks what someone like him can do, Valvatorez answers by telling him he should become a Prinny and pay for his sins. Nemo is touched by Valvatorez speech that every sin is repayable and he will help Nemo pay his sins off since it is his duty as a Prinny Instructor, but before he can say anything, the last remaining energy of Fear the Great attempts to keep him there as the core, starting the final boss battle.

After Nemo is defeated and freed from Fear the Great, Nemo says to Valvatorez and Artina that they must have alot of faith in each other and that he'll put his faith in the world again for just one more time. He then tells Artina that he will face his sins no matter how long it takes and tells Valvatorez that he hopes he'll guide him through it. After that, Nemo's soul is then reaped by Emizel as Valvatorez says "Judge Nemo, I'll see you in Hades." During the credits, one of the scenes shows Nemo as a red Prinny staring at the Red Moon.

If the player completed the previous stage using only Valvatorez (at Level 500), an alternate version of the scene will be trigger. The cutscene plays out normal, but instead of being taken over by the last remaining energy of Fear the Great, Nemo floats into the air as bursts of energy appears around him and two giant Eryngi appear. One of the Eryngi reveals that they are a part of God and that Valvatorez and his party have been deemed too dangerous to exist and that it has been dispatched to eliminated them. Despite this, the party (excluding Artina for the moment) seems eager to fight God's Parts. Nemo shouts to them that they won't stand a chance and to just run and forget about him before they are annihilated with him, but is told to shut up by Valvatorez who isn't about to run away against God. Artina is shocked that she is about to fight God and is uneasy due to the fact she is an angel, but becomes at ease when Emizel mentions she could switch to being a Fallen Angel, which causes Nemo to question if she has changed.

In battle, Nemo's has the True Final Boss enemy class. Like most final bosses, he has really high HP and superior stats. Aside from HP, his highest stats are ATK and DEF, followed by SP, INT, RES, and Hit. Unlike the other final bosses in the series, he doesn't have Giga level spells and is a human-type unit instead of a monster-type unit (as can be seen in his equipment, he holds the Malice DES X sword). Due to being Magichanged with Malice Des X, Nemo has Desco's Final Boss Setting unique Evility and has two of his own unique Evilites, Physical Malice, which summons one Malice unite every turn and Flooding Malice, which increases his stats by 10% times the number of Malice unites. Nemo also has a very large movement range and can walk though the players units, making it impossible to trap his movement. His only skill is his signature move, Fear the Great (named after the same machine that is using him as its core by feeding off his Malice), which has a very large area of effect, being capable of hitting nine targets at once.

Nemo appears as a DLC character. He joins the player's party after the opening scene of the fourth chapter of the Fuka and Desco scenario. Unlike his appearance as a final boss, Nemo appears as he did before he was taken under the control of Fear the Great in its attempt to keep him as its core. He still possess his only Skill and his two new unique Evilites let him:

His class is "Human World Ruler" and he has no weapon forte, like the Android. But, unlike this job class, he can't learn any weapon skill(s) at the Evility Shop. 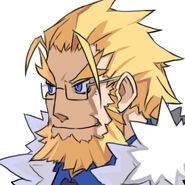