Nagi Clockwork is a character that made her debut in Disgaea 4: A Promise Revisited. She appeared in the new time-leap scenario.

Nagi Clockwork was a girl involved in the war between Gustark and Rekidona that took place 400 years before the story of Disgaea 4. She is a young Mechanician who was taught Mechanology at a young age from her now deceased father. She summons Fuka and Desco using Mechanology at the beginning of the time-leap scenario so they could help her stop the war between Gustark and Rekidona. Her plan was to take out every soldier so that both sides would be forced to retreat and end the war. As the story carries on she and the others meet Artina who reminds her of her sister and the two develop a close sister-like bond with each other. Later, she is informed by Fuka and Desco about Artina's inevitable death and tries to help stop it from happening.

Eventually, her past and motivations for wanting to stop the war are revealed to Artina. Nagi tells her that at the beginning of the war, the place she lived became a huge battlefield and her home was invaded by soldiers whose loyalties she didn't know. Her family told her to escape and they would meet up with her eventually. Unfortunately, Nagi was the only one able to escape and her family was burned alive in their own home.

As the story comes to a close, Artina and Nagi escape to a church where Nagi promises to stop trying to stop the war as long as Artina promises to stop getting herself into danger by entering battlefields to save injured soldiers. Afterwards, the two are attacked by Gustark soldiers but are rescued by Fuka, Desco, and Valvatorez. Unfortunately, Artina's fate remain unchanged and she was murdered in a sneak attack by a Gustark soldier. After mourning her death and making sure to keep her promise she begins preparations to send Fuka and Desco back to their time, but due to a mistake the pocket watch works before she activated it and she is taken with Fuka and Desco back to Hades. After arriving in Hades, Nagi is able to be reunited with Artina and with the pocket watch missing she is left unable to return to her time. She is invited to stay in the Netherworld with them all and happily obliges. 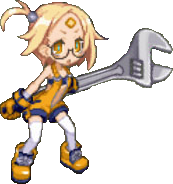 Nagi's battle sprite in Disgaea 4 Return.
Add a photo to this gallery

This article or section is a stub. Please help the Disgaea Wiki by expanding it, so it won't stay a little shrimp like Laharl.
Retrieved from "https://disgaea.fandom.com/wiki/Nagi_Clockwork?oldid=38243"
Community content is available under CC-BY-SA unless otherwise noted.