The Mystic Beast is a monster class in Disgaea 3: Absence of Justice. They are proud beasts that can run as fast as the wind itself.

Retaining its design from Disgaea 2: Cursed Memories, the Mystic Beast is a wolf-like creature with a horn on its head, along with long strands of hair that are colored differently than the body fur. They are known for being able to run at high velocities, giving them insane speed. Their attacks also get more deadly with speed (as shown with its native Evility, Assault Charge, which increases their critical hit ratio by 10% for every space moved within a single turn). 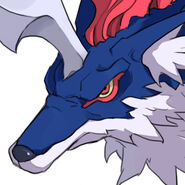 Mystic Beast's Cut-In Image
Add a photo to this gallery

Retrieved from "https://disgaea.fandom.com/wiki/Mystic_Beast_(Disgaea_3)?oldid=37309"
Community content is available under CC-BY-SA unless otherwise noted.