Grant George
The Dark Adonis, Vyers, otherwise known as "the Mid-Boss", is a character who debuts in Disgaea: Hour of Darkness. Since then, he has made cameo appearances in other Nippon Ichi games. He is a narcissistic demon with a French accent fighting for the throne of Overlord, and the first major enemy Laharl fights on his quest to take the throne himself. After being defeated by Laharl, Vyers spends the game incessantly engaging the prince in combat. Laharl christens him with the name "Mid-Boss", which sticks not only for the rest of Hour of Darkness, but the entire franchise.

Though it's unknown where he came from, Vyers was the recent leader in the battle for the throne until Laharl awakened from his slumber. He often refers to himself by his personal epithet: "the Dark Adonis". However, Laharl, deeming Vyers unworthy of any real title, brands him with the name "Mid Boss", which sticks for all of his subsequent appearances (and even in other games where he appears), with even the game itself calling him "Mid-Boss".

Speaking in a cultured tone seasoned with French, Mid-Boss is very conceited and confident in his own abilities. However, whenever he is about to lose, he either comes up with an excuse (such as stomach cramps) or leaves battle wrapped in bandages. Because he lost to Laharl, Mid-Boss sees Laharl as a rival even though Laharl doesn't even see anything in him. Oddly enough, he isn't above helping his rivals either.

Mid-Boss is also something of an actor. Even for the player it is usually hard to tell when he's playing a role and when he's being himself. There is a great deal more to him than meets the eye. He is also good at heart, as proved when he held Flonne's necklace, which harms the wicked, with impunity.

The true identity of Mid-Boss is actually the reincarnation of King Krichevskoy, Laharl's father, as he has a similar appearance and voice, as well as appearing alongside Laharl's mother in one of the endings. It is also confirmed in Disgaea artbook. Also in the manga, Mid-Boss knows every passage in the Overlord's Castle, and Flonne even stated that "He sure knows a lot for a guest". Also in the anime, when it is revealed that Laharl's sister is a doll, he says he is glad she is not his love child, yet another clue he is King Krichevskoy.

In Etna Mode, Mid-Boss is encountered the same way as in the original story. Unlike with Laharl, however, Mid-Boss asks Etna a question regarding her loyalties to King Krichevskoy, in which Etna responds with the notion that the King would understand her decisions. In the normal ending to Etna Mode, Mid-Boss is the one that warns Etna that Laharl is "the son of the famed King Krichevskoy". This is how Etna knows to check on Laharl in the Stellar Graveyard, where she finds him irritable, but alive.

Note that Mid-Boss keeps the name "Vyers" throughout the entirety of Etna Mode, due to Laharl not being around to bestow the "Mid-Boss" nickname upon him, yet his battle name is still "Mid-Boss".

The player faces Mid-Boss as a Hidden Boss in the stage unlocked by the Dark Assembly bill titled "I want to see the ending". Rozalin assumes that he's the final boss, but before Mid-Boss can properly introduce himself by his preferred name, Adell retorts that he is better suited as a 'Mid Boss', which enrages him as the nickname once again clings to him. When defeated, he dismisses his loss as a fluke and treats the player to their promised "ending" (which is nothing more than the credit reel with artwork of Mid-Boss in the background). In Disgaea 2: Dark Hero Days, Mid-Boss is battled in the exact same way. However, after beating his map and starting a new cycle, if you pass his bill again you unlock another bill that lets you recruit him as a playable character.

Mid-Boss appears in Disgaea 3 to become a teacher at Evil Academy. When he first appeared, Mao didn't believe him to have incredibly high level power and thought he only had "Mid-Boss Level" power which of course insulted him greatly. After the battle it is revealed that Mid-Boss was working for Mao's Dad to make sure that Mao was becoming a good Overlord. Mao realizes he wasn't using his full strength and decides to hire him until he can see his full power. In battle, Mid-Boss is once again a Monster Type character and has access to his Adonic Buster move from Disgaea 2. His native Evility, Harem, increases his stats by 5% for every ally unit if all ally units are female. He can Magichange into a sword and one of his new moves, Super Adonis, has him create multiple clones of himself which Magichange with him while he tosses them at the enemies.

Mid-Boss only makes a brief appearance in Digaea Infinite in the Asagi Ending. He enters the room where three Prinnies are watching TV and eating snacks when Asagi yells through the cellphone. Mid-Boss ignores it and swipes one of the Prinny's snack, causing it to get mad. He then gets chased around by the angry Prinny, who is swinging his knives, while carrying the food. Once the Prinny gets the food back, Mid-Boss chases that Prinny in a mech suit (the RX-66 Helldam from Makai Kingdom), shooting the machine guns. In the chaos, he breaks the television, causing the third Prinny to turn around in fury and rocket into the sky. It comes back to the scene in an even larger mech suit with flaming knuckles (the body of Raksha from Soul Nomad and the World Eaters), and then chases both Mid-Boss and the Prinny. The scene ends when the last Prinny hangs up the cellphone. Oddly, Mid-Boss has no dialogue in this sequence.

He appears in Phantom Brave along with the three main characters of Disgaea: Hour of Darkness as hidden bosses and is playable should the player beat him. When facing him, his main theme Beautiful Round Dance from Disgaea still plays.

Mid-Boss appears as an obtainable character. 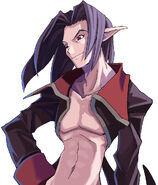 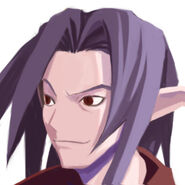 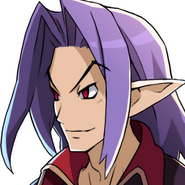