Masked Hero is a Humanoid Character class that first appeared in Disgaea 3: Absence of Justice.

In appearance, he looks similar to the heroes in Science Ninja Team Gatchaman. His costume is themed after a Prinny. Oddly enough, despite being a human class, his movement type is Flying, meaning he can pass through enemies while moving. This ability works well with his 2 weapon styles, Fist and Gun. Masked Heroes work well if they have Shoe Items equipped to them, which will greatly boost their Speed, movement spaces and Jump ability which is already rather high. 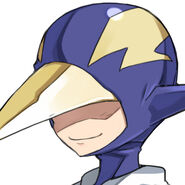 Masked Hero's Concept Art
Add a photo to this gallery

Retrieved from "https://disgaea.fandom.com/wiki/Masked_Hero_(Disgaea_3)?oldid=40812"
Community content is available under CC-BY-SA unless otherwise noted.