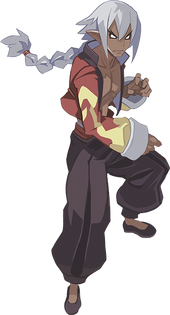 The Martial Artist is a humanoid unit in Disgaea D2: A Brighter Darkness.

The Martial Artist is one of the initial classes made available from the start.

The Martial Artist has higher HP and ATK, and less SPD than his female counterpart, but that's the extent of their stat differences.

The Martial Artist is a physical attacking class in a vein similar to the Warrior and Valkyrie, but is more simplistic in application. Fists are the main weapon of this class, with high ATK and SPD to accomodate. DEF is rather low for a physical attacking class, with SPD being stressed to compensate. The Brawler also has slightly high HP growth than the rest of the starting classes, which only serves to compliment their up-close style of fighting.Like other physical classes, RES and INT are low, making them vulnerable to Magic. Later tiers of the Martial Artist also see an increase in Sword/Spear/Bow Mastery, allowing them to branch into other fighting methods later on, though Fists best augment their strong stats.

Evilities are all centered around Counterattacks. These range from an increase in Counter-Attack power per Counter launched, to all Counters on the Brawler's part being 100% accurate.

“These men train their bodies to the limit and try to master their own way. They envelop their bodies with dark energy and can fight against any weapon with just their fists. They genuinely believe that fighting determines true justice. It is said their techniques originated from a legendary martial artist who came from the Human World. They dress like their ancestors.”
—Disgaea D2: A Brighter Darkness 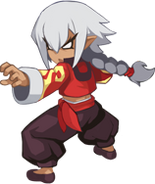 Martial Artist's sprite in Disgaea D2.
Add a photo to this gallery
Retrieved from "https://disgaea.fandom.com/wiki/Martial_Artist_(Disgaea_D2)?oldid=37971"
Community content is available under CC-BY-SA unless otherwise noted.