The Martial Artist is a class in Disgaea 3: Absence of Justice. He appears as a Chinese martial artist. He looks similar to a combination of the Martial Artist from Disgaea: Hour of Darkness and the Sinner from Disgaea 2: Cursed Memories. He is also blind due to his eyes being blank (as stated when talked to in the classroom). His native Evility, Fury, increases his damage output for every counter attack that happens in a turn.

When a player begins a New Game, Geoffrey will provide Mao with several "Starter Characters," one of which is a Martial Artist. His name is randomly generated. 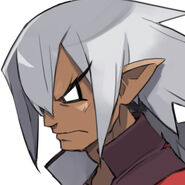 Martial Artist's Concept Art
Add a photo to this gallery

Retrieved from "https://disgaea.fandom.com/wiki/Martial_Artist_(Disgaea_3)?oldid=35461"
Community content is available under CC-BY-SA unless otherwise noted.