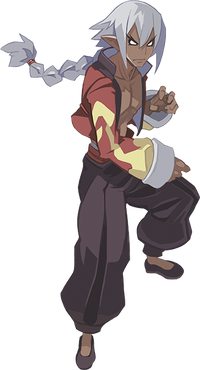 The Martial Artist is a recurring humanoid class in the Disgaea series first introduced in Disgaea: Hour of Darkness.

In Disgaea: Hour of Darkness, Martial Artists are dark skinned masculine humans who have long black hair and wear dark green pants. They have red tattoos on their arms.

Starting with Disgaea 3, they wear red shirts and their skin tone is slightly different than in Disgaea: Hour of Darkness. They now have white hair instead of black hair and their pants are dark red.

Said to be descended from a human street fighter, Martial Artists live to grow stronger and take their bodies to the extreme to master their path. Despite fighting mainly with their bare hands, they are able to combat weapons like swords and guns with the aid of a battle aura called "Dark Hadou".

They are physical fighters who specialize in using their fists to attack enemies, so they are most effective with Fist weapons. They have poor aptitude in defense but average in HP, so equipping them with muscles is likely to help them survive more than if regular defense boosting armor is equipped. As a side effect, better healing spells are required to heal them completely than average. Defense reducing belts are also less damaging due to the Martial Artist's poor defense aptitude.

Martial Artists first appeared in Disgaea: Hour of Darkness as a starting class.

While replaced by the Sinners in Disgaea 2: Cursed Memories, Martial Artists return in Disgaea 3: Absence of Justice, again as a starting class.

Martial Artists make an appearance as one of the initial classes made available from the start.

Martial Artist artwork from Disgaea 3: Absence of Justice
Add a photo to this gallery

Retrieved from "https://disgaea.fandom.com/wiki/Martial_Artist?oldid=45964"
Community content is available under CC-BY-SA unless otherwise noted.